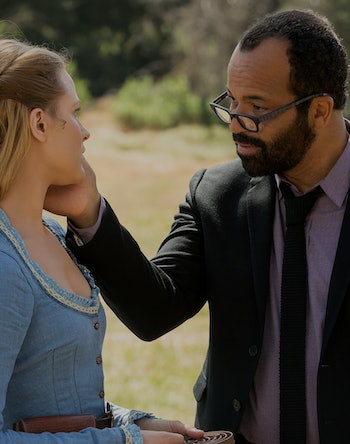 Westworld has just finished its first season, and there’s a lot of information to digest. Even more so, there are Easter eggs and clues that further explain what’s already happened on the series, as well as predict what’s yet to come. Of course, it’s all full of spoilers, so if you haven’t watched the finale yet, stop reading now.

“The Bicameral Mind” basically changed the entire game, both in-world and on the show itself. Dolores has been unveiled as Wyatt, the Man in Black has been William all along, and Dr. Ford’s new narrative lets guests be murdered. We’ve got an entire park being posthumously held captive by Ford, with the promise of at least one or more new parks to explore in the future. We’ve got at least a year before we can even think of getting a second season of Westworld, so let’s break down some of the best Easter Eggs we’ve seen from the first season’s shocking end.

Newly uploaded security footage on the Delos website, which shows the hosts’ rampage, has a date of June 15, 2052, so that means that’s the year the show is currently taking place. 34 years prior would be the year Dolores shot and killed Arnold, placing that event in 2018, just two years from now. This puts the park opening at around 2022. Side note: Assuming it would take several years or decades to perfect the technology, it’s safe to assume Arnold and Ford would’ve already been working on artificial intelligence by now. Crossing our fingers for a real-life Westworld by 2020.

Lots of people assume Elsie was killed off after “Trace Decay,” but some code on the Delos Incorporated site hints at her current whereabouts. There’s also a secret audio recording where she says “Hello?”, indicating that she’s still alive and somewhere hiding in the park. Who knows, she might be heading to one of the other parks. Speaking of which …

3. There are definitely other parks

We’ve seen the signs that Samurai World is in development, but there’s no confirmation it’s anything other than a conceptual project at this time. However, there are references to “the parks” through the episode, and the note Felix gave to Maeve showed that her daughter is in “Park 1.” That means there are definitely other worlds to explore on the series, probably beyond even Samurai World. Here’s hoping we get Futureworld!

Everything happens for a reason on Westworld. It turns out the note that Maeve received showed that her daughter was in “Park 1, Sector 15, Zone 3.” Someone on Reddit went to the Bible for the equivalent verse, which would be Genesis 15:3. It reads: “You have given me no children; so a servant in my household will be my heir.” It looks like Maeve’s decision to get off the train might have broken her loop, since her instructions included “Mainland Infiltration.” This, plus the Bible verse, hints that Maeve is choosing to make her family, rather than have it be decided for her, which could be a big part of her growth next season.

It turns out, when Ford said that Arnold never made it to the top of the “pyramid” of conscious thought, it’s because he thought it didn’t exist. When we see Arnold’s drawing of the pyramid to consciousness in the final episode, it has three layers: Memory and Improvisation, with the top left blank. He later abandoned this theory, instead calling it a “maze.” Dr. Ford’s pyramid from earlier in the season has four spots instead of three, adding Self-Interest as the second-most important asset needed for consciousness. This clearly was an early hint that Ford was continuing Arnold’s work, even if he professed that he didn’t believe in it. It’s still not clear what Ford believed would go at the top, but if it’s based on the Maslow Pyramid, it could be Self-Actualization, which is achieving one’s full potential.

6. There are a couple nods to the original Westworld movie

In the scene where the Man in Black is waiting for Ford to give his “retirement” speech, the shot where he’s drinking a glass of whiskey looks almost identical to a scene with the original Man in Black, played by Yul Brynner. There’s also a moment where Felix hilariously starts shaking his hands at the thought that he might be a host, because hands were the only way you could tell the difference between a host and a guest in the original film.

Aeden is the virtual greeter that was developed for Discover Westworld, answering questions about the park, like how much it costs to go. The actor who played Aeden in some of the online footage, Nick Ballard, is credited in the final episode of the season. While it’s hard to tell, it looks like he’s one of the greeters near the train that Maeve walks by as she’s leaving the facility. After the season finale on Sunday, his A.I. has changed significantly, showing that he, along with the other hosts in the park, are now aware and angry.

The last time we see Peter Abernathy, Charlotte Hale and Lee Sizemore were uploading him with a bunch of data that they could smuggle out of the park. However, when Lee went to retrieve him out of cold storage, all of the decommissioned robots were gone, preparing to launch an assault on the park’s guests and board members. We didn’t see Abernathy with Clementine and the other robots, which means his location is still a mystery. Most likely, he’s loose in the park, driven insane from sentience combined with being given all of the park’s biggest secrets. Finding him will be a top priority for the board, along with, you know, surviving.

A lot of people see Felix as some weirdo that was helping Maeve because he didn’t know how to say no. However, he might actually be a real hero in the story. It’s been pointed out that Felix and Dolores appear to be two sides of the same coin. Just as Dolores gained consciousness through suffering, by killing Ford, Felix gained conscience through joy … in that moment when he revived the robot bird. It’s what motivated him to help Maeve, because he wants the hosts to be free. Therefore, it makes sense that Felix is Latin for happiness, while Dolores is Latin for sorrow, because those are the emotions that woke them up.

We now know how Dolores’s whole path was set in motion. It turns out, when Arnold added Wyatt to Dolores’s code 34 years ago, the phrase “these violent delights have violent ends” was installed as her Voice Command to engage this personality. That would explain why Abernathy was saying it to her at the beginning of the series would change her loop and set her on her journey to self-actualization. It triggered the Wyatt personality, where she could harm a living thing, like the fly at the end of the first episode. There also looks to be significance in playing the song “Reveries” by Debussy, which happens right before Dolores kills both Arnold and Ford.

There will surely be plenty more to unpack in the weeks and months to come, especially after people (hopefully) rearrange the season in chronological order. Westworld has been confirmed for a second season, but it looks like it will release 2018 at the earliest.