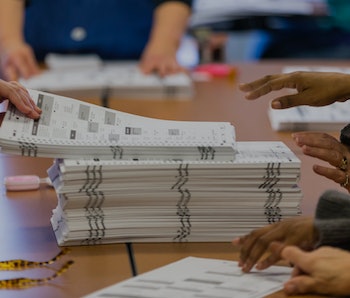 Maine has now become the first state to adopt ranked-choice voting in state elections. The public vote, which passed with 52 percent, was largely inspired by Maine voters’ frustration with current governor Paul LePage. Twice, LePage — now notorious for saying some unfortunate things — has been elected with less than 50 percent of the vote in a three-way race. Adopting ranked-choice voting seems to be, at least in part, a way to prevent LePage from winning that way in future elections, as ranked-choice voting necessitates a true majority to win.

In adopting ranked-choice, all eyes are on Maine as it becomes a laboratory of democracy. While some cities such as San Francisco and Minneapolis have also switched to ranked-choice, Maine represents the largest-scale implementation of this form of voting. In a time when many are frustrated with current elections system (looking at you, winner-take-all electoral college), people have been keen to find alternatives. Ranked-choice voting, if it proves successful, could be one of them. Here’s how it works, and how it differs from the system of voting that the vast majority of America currently has:

Most of it is in the name. Ranked-choice voting requires that voters do just that, rank their choices. Instead of casting one vote solely for their favorite candidate, voters will rank all of the possible candidates on the ballot in order from first choice to last choice. If there are three candidates, voters will rank them one to three. If there are five, then from one to five. Then, in the first round of counting, only peoples’ first-choice candidates are counted. A true majority, over 50 percent, is required to win. If no candidate has earned a majority at the end of the first round, the candidate with the fewest votes will then be eliminated. Those voters who listed as their first choice the candidate who was just eliminated will have their second choices counted in the following round. This continues until someone emerges with a majority.

This is different from most current systems where a candidate only needs a plurality of votes to carry a state. In other words, a candidate doesn’t actually need most of the voters to vote for them. They only need to get more people than the other candidates. Turning back to Maine, this is the scenario that voters are railing against, where most voters don’t actually want a candidate but that candidate wins regardless. Ranked-choice voting ensures that a true-consensus candidate emerges the victor. They may not have been everyone’s first choice, but it’s likely that a majority of voters placed them on the higher end of their list.

Whether or not ranked-choice is successful in Maine remains to be seen. But, if it is, it could be a viable alternative in presidential elections as well. And it wouldn’t even require an amendment because the Constitution gives states the authority to decide how their electors are chosen. It would just need each individual state to decide to implement it as the process by which they allocate their electoral votes.