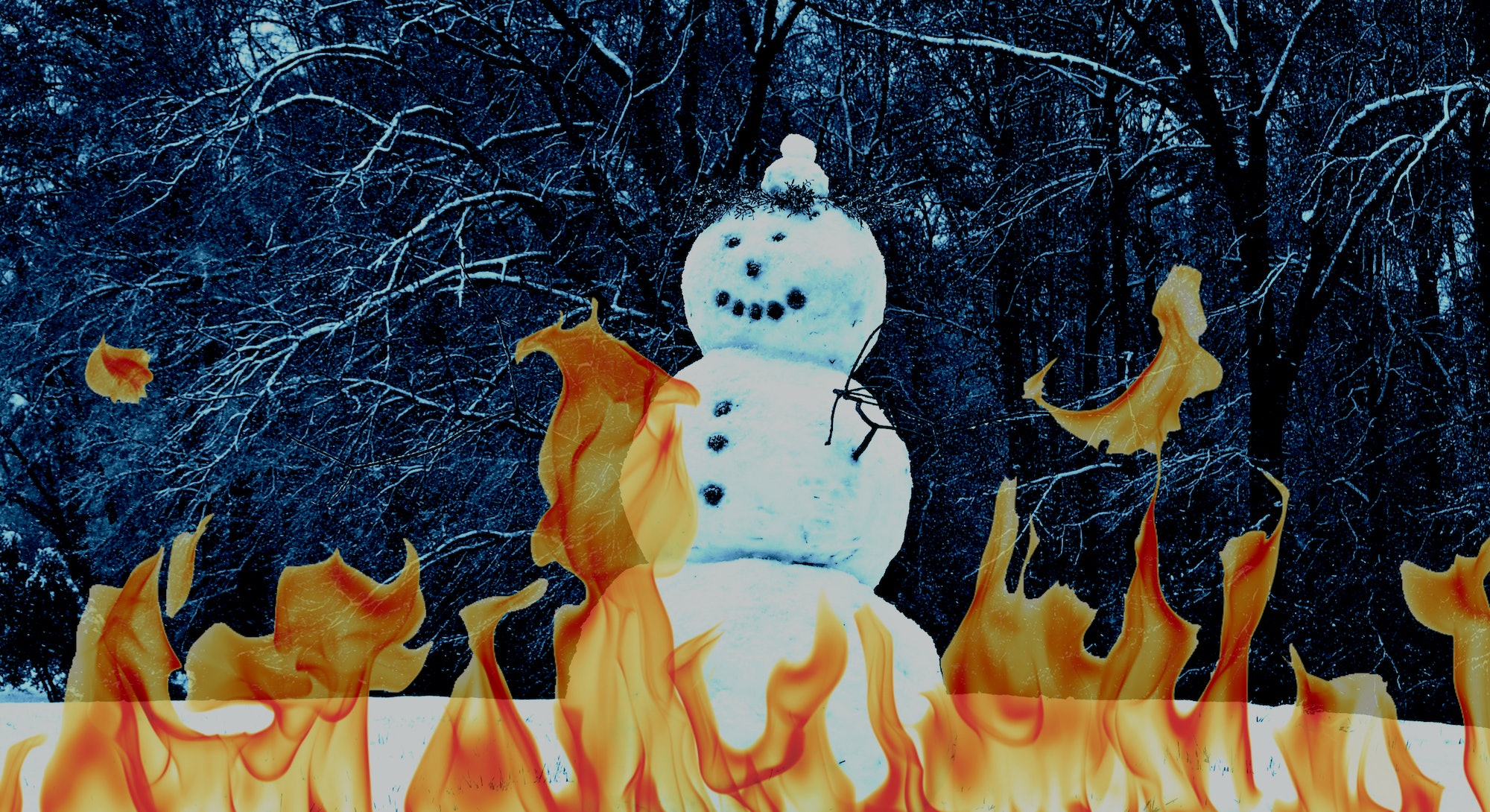 A fresh snowfall is a deceptive thing. It is tempting to think of all that whiteness as a visual allegory for serenity; the thick silence and uniform cleanliness a storm leaves in its wake seems, on first blush, preferable to all that messy flotsam dragged along by heat waves. But heat and cold aren’t ultimately that different to our central nervous systems. The calm facade of winter hides a burning truth about precipitation.

Couched in the lyrics of the holiday classic “The Christmas Song” is a line about “Jack Frost nipping at your nose.” What is widely considered to be a sweet winter detail is actually a minor horror: Frostbite, the cold equivalent of a heat-induced burn, can sometimes be so severe that gangrene follows (and amputation follows that). It’s essentially a burn, like a sunburn in many ways but often more severe and more dangerous.

What is a burn, anyway? A lightly burned piece of flesh will turn red and form blisters; worse burns will peel and discolor, and in the worst cases the damage will too deep to even be painful. A third-degree burn — one where the skin’s three layers have been destroyed — often also destroys the nerves that transmit pain signals to the brain in the first place. In short, the word burn refers to an injury to the skin and the tissues and organs beneath it, but it doesn’t specify what causes that injury.

Some parts of the body are more prone to frostbite than others. Jack Frost does not nip at our noses haphazardly; he does so because noses, like the body’s other extremities, are easy pickings. When the body goes into self-preservation mode, it retreats inward, leaving its expendable, outermost protrusions to fend for themselves. Fingers, toes, ears, and chins are all high-risk areas, and if burns to these areas are serious enough, they may very well force amputation.

The moment the skin starts turning pale and bloodless is when the real trouble begins. Decreased blood flow to your skin means that the cells there aren’t receiving the oxygen and nutrients they need to stay alive, and if this goes on for long enough, they will die. Fortunately, the body has its priorities straight, deeming the skin’s outer layer — the epidermis — the least important. When cells in this layer start to die, doctors call it a first-degree burn and usually aren’t too worried. A second-degree burn, which is more serious and results in painful blisters, affects the dermis, and a third-degree burn completely destroys the first two layers and starts affecting the bones, muscles, and tendons underneath. With serious frostbite, it isn’t just the skin cells that are affected; ice crystals start forming in cells, and the unused blood vessels become damaged — sometimes irreversibly. If blood flow is cut off for long enough, gangrene settles in.

On top of the horror of watching your skin cells discolor, harden, blister, and ultimately turn black, frostbite brings with it a twisted brand of ironic agony. The prickling sensation that eventually spreads across your naked flesh may be something that you might describe as feeling “hot.” Nakedly crouch in the snow long enough, and the feeling becomes unbearable. That sensation is, ultimately, just the feeling of pain. This phenomenon, known as “paradoxical cold,” is thought to happen when the body’s temperature-sensing neurons are exposed to such extreme temperatures that they seem to tip off the pain sensors too. While the evolutionary advantage for this bodily quirk is still up for debate, it was most likely involved in signaling early humans to seek shelter ASAP.

The beginnings of frostbite are easily ignored or even celebrated: Red noses and flushed cheeks are treated as a sign of seasonal spirit rather than as a warning. But the flush and the sense of cold, cold heat that accompanies it is no cause for cheer. Winter burns. Snow burns. Cold burns. To understand that is to understand all that fresh powder as your epidermis does: It’s fire wrapped in ice.