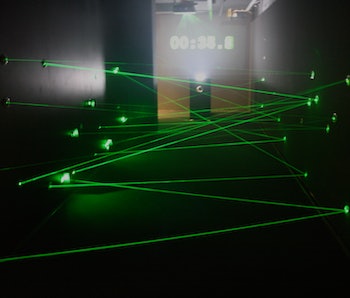 In the future, James Bond’s nemesis might skip shooting electron-based lasers for something a bit more refined. Students at the Technion-Israel Institute of Technology decided to explore water wave oscillation as a way of producing a laser beam, and incredibly, they discovered that not only is it possible, but it may make for a better approach.

Typical laser beams are produced by exciting electrons and making them oscillate. To do that, light is focused into a very precise point, concentrating the energy and producing something that can be used for, say, reading the data on a DVD or trying to get Mr. Bond to talk.

This new “water wave” follows a similar idea. Water oscillates, but before now it was considered too slow to produce any meaningful amount of energy. The light focused through a water wave would have far less energy than a traditional laser.

The team worked around this by using an optical fiber and mixing octane with water. They realized that the liquid interacting with the fiber was “echoing,” much like how sound waves reproduce someone’s voice repeatedly. The team used transparent, runny liquids to encourage this interaction further.

It’s a breakthrough that could have big implications for future laser-based devices. The water droplets are around a million times softer than the components used in today’s lasers. That means engineers could have much greater control over a laser’s emissions. It could also mean smaller laser devices, leading to efficient “lab-on-a-chip” devices that could test new drugs.

There’s a whole range of applications the technology could be useful for, but do you expect a comprehensive list of all of them? No, Mr. Bond, I expect you to die!