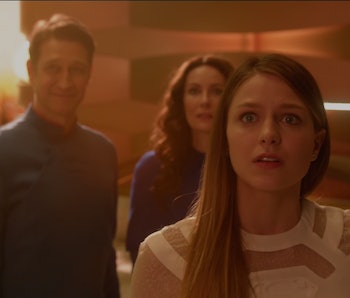 Most viewers wound up somewhat disappointed by the Supergirl episode that kicked off the “Invasion!” Arrowverse crossover event. Despite being a great episode of Supergirl, it was a lackluster first chapter to a supposed four-show crossover extravaganza, but certain details tie things together more tightly than we previously thought. The Medusa virus used by Project Cadmus to try killing all non-Kryptonian alien life on Earth was almost certainly bioengineered by Supergirl’s father to combat a Dominator invasion of Krypton at some point in the Earth-38 universe.

On Supergirl, Cyborg-Superman steals some of Supergirl’s blood and uses it to gain access to the Fortress of Solitude so that Cadmus can get the formula for the Kryptonian-based biological weapon. Medusa, as it’s called, lends its name to the title of the episode.

In “Medusa,” Supergirl goes to the Fortress and learns from an A.I. projection of her father, Zor-El, that he in fact created the super-weapon as a method of combatting some kind of alien invasion:

Kara: What is Project Medusa? > Zor-El: Medusa, a weaponized virus that I created for the defense of the planet Krypton. > Kara: Wait, uh, a virus you created? > Zor-El: It was a joint partnership between the Science and Military guilds. We bioengineered the virus to attack non-Kryptonian physiology. In the event of an invasion, Medusa could be deployed to kill alien combatants while keeping our civilians and infrastructure safe from harm.

He reassures her that “it was the perfect weapon” built to “save Kryptonian lives,” but why even bother with such a drastic deterrent method unless there was a very real threat out there? In the very next episode, this time on The Flash’s turf, Supergirl almost immediately blurts out the following about the Dominators:

Except they’re really strong … I heard a lot of stories about them when I was a kid. They came to my planet before I was born. They did experiments on a lot of people. Killed a lot more.

By the end of “Invasion!”, we come to learn that the MO of the Dominators is to scout planets in force to assess threats. We see as much in the finale to the crossover as some of the Legends go back in time to Oregon in 1951, where (and when) they hope to kidnap a Dominator for interrogation. Dominators are kidnapping various soldiers in that time period, no doubt probing their subconsciouses, much like they did to A-Team Arrow in the previous episode. It’s not until all the meta-humans and superpowered folks show up — especially after Barry alters the timeline — that the Dominators take notice and attack in 2016.

Though the Dominators fled Earth at the end of the crossover, who’s to say they won’t be back in force on Earth-38? And now that Supergirl has a handy device, she can call for help and move between universes at will.

There’s no real precedent for Medusa in the comics continuity, at least by name anyway, and no virus that we know of that functions in such a way. Borrowing the name from a Gorgon that can turn people to stone with a glance is a bit arbitrary, but it stands to reason that the Medusa-centric episode fell pointedly at the beginning to this epic crossover event for a reason. Project Medusa had everything to do with the virus. It’s too bad Kelex isn’t around anymore to confirm the theory…

More like this
Entertainment
21 hours ago
James Gunn's DCU Will Have Close Ties to This Year's DCEU Movies
By Eric Francisco
Entertainment
23 hours ago
We Finally Know Where Westworld Will be Available to Stream
By Dais Johnston
Entertainment
16 hours ago
In Knock at the Cabin, a Terrific Dave Bautista Saves M. Night Shyamalan From Himself
By Hoai-Tran Bui
LEARN SOMETHING NEW EVERY DAY.
Share: