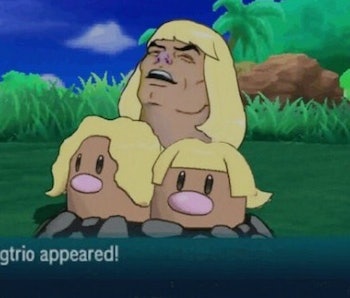 In the lead up to the release of Pokémon Sun and Moon, the internet worked itself into a lather prepping for new Island Trials and Alola versions of classic monsters. Whenever a new character or Pokémon was announced, comment sections and subreddits treated the fresh information with the sort of calm reserve associated with sharks in chum-filled water. Naturally, fans memed the hell out of everything.

The introduction of Dragon-type Exeggutor had everyone making fun of its ridiculously long neck. People were totally obsessed with the Pikachu-wannabe Mimikyu. And of course, excited Pokémon trainers picked their favorite starter buddy even before getting to play the game.

Now that the games have been out for a few weeks and people have explored the Alola region with their team of Pokémon, meme production is peaking again, this time based on recurring themes and new features: Nebby’s tendency to break out of Lillie’s bag, just how campy some Alola variants can be, and onward in that vein. The memes are, taken collectively, one of the most thorough video game reviews ever.

34. Leveling up Pokémon can become a riot.

31. Litten makes so much sense now.

29. Dugtrio just became the prettiest Pokémon of the islands.

25. When evolution really screws you up.

24. Pokémon may appear smaller in Sun and Moon.

22. The old rocks could totally be jumped over.

14. Turns out Mimiyuki is a savage.

13. “The pokedex entries in sun and moon are WILD”

9. “I ruined this man’s life by beating him in a pokemon battle”

8. We’ve gone through this so many times Nebby.

7. Pokémon are part of a balanced breakfast.

4. Litten’s totally fine with this.