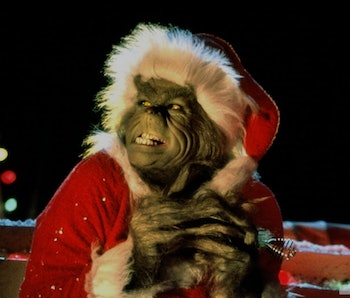 The Grinch is the original holder of unpopular opinions. While Christmas might not be tomorrow, the Christmas movie season is upon us, so it’s time to start defending your favorite unpopular-opinion Christmas films.

Here’s an unpopular opinion: the live-action remake of Dr. Seuss’ How the Grinch Stole Christmas starring Jim Carrey and directed by Ron Howard is one of the best Christmas films of all time. It’s definitely better than the original cartoon.

Carrey is a comedic genius, and between the goofy one-liners and not-at-all underlying sexual innuendos, his Grinch is the ultimate Grinch, not only for the 21st century, but for all time. Here’s a list of 11 reasons why the 2000 How the Grinch Stole Christmas is the best one.

When the Grinch is finished giving saws to children, putting eviction notices in people’s mailboxes, and generally causing havoc down in Whoville, he takes a ride through the town’s underground trash disposal system to the dump on top of Mount Crumpit. He ends up mere steps from the entrance to his lair, which, in the live-action version, is an echoing, neon-lit cave filled with trinkets and bamboozling contraptions that whine and chime late into the night.

The space is where he does most of his plotting, and seeing the Grinch’s weird, built-from-scratch tech come to life before your eyes, surrounded by a lumpy mattress and socks so dirty they run off on their own, crying, is a true Christmas treat.

The live action How the Grinch Stole Christmas reveals that baby Whos are brought to Whoville in “pummersellas” — weird, umbrella-donned baskets that take the place of the usual stork story. On the night the Grinch flew into town in his own basket, he witnessed debauchery and drunkenness from the women who would soon raise him, and a man making the astute observation: “Honey, our baby’s here! He looks just like your boss.”

This “family” movie is dark and weird and not at all acceptable for children to watch. And yet so many do. The jokes are dirty, the sexuality is overt, and there are dick jokes abound.

9. You Just Know Half of This Ridiculousness Was Ad-Libbed

A movie starring Jim Carrey is going to be filled to the brim with ad-libbing. And a movie directed by Apollo 13 and A Beautiful Mind director Ron Howard is perfect ad-libbing content on Carrey’s part. An entire scene of Grinch is dedicated to Carrey, in character, mocking Howard’s directing style as he steals his hat and directs his dog, Max, in the best way, to play Rudolph. Of course, as always, Max has the best answer — rejecting his nose entirely because it “represents the glitter of commercialism.”

8. Christmas Is Really About “Vengeance”

The 2000, live-action remake of Grinch perfectly captured the story Dr. Seuss’s 1956 classic was trying to tell. The extra length and cheesy one-liners ultimately lead to a movie that gets to the heart of this Christmas tale: It’s a story about finding joy after going through hardship.

When Cindy Lou Who asks the Grinch what Christmas is all about, he breaks his thin Santa guise and can’t help but shout, “Vengeance!” before pausing, batting his eyelashes and saying, “I mean, er, presents, I suppose.” This simple line goes toward bringing about the final message of the film.

Carrey’s famous rubber face was the only thing that could have really brought the Grinch to life. That famous, curling smile that the original animated Grinch was known for was absolutely necessary, and Carrey nails it.

And, of course, the makeup team on this film probably had a ball. But poor Carrey. His full yellowed-out contacts hurt him so much that he often couldn’t wear them through an entire day of filming. The prosthetic makeup took eight hours every day to apply, and Carrey reportedly felt so confined by the latex skin of the suit that he needed counseling from a CIA agent who taught him torture-resistance techniques.

6. The Horrible Mayor of Whoville

Mayor Augustus Maywho, played by Arrested Development actor Jeffrey Tambor, is the ultimate slimy politician. As far as audiences can tell, Maywho’s been mayor for decades, and he isn’t letting go of the title anytime soon. It’s only the Grinch that’s able to partially reveal him for the fool he really is.

A bully in the Grinch’s childhood, Mayor Maywho spends his days fearmongering amongst his constituents and chasing local bombshell Martha May Whovier, using taxpayer dollars to buy her a new car in the hope that the gift will convince her to marry him. He’s awful, and he’s the perfect villain that you love to hate.

Making Cindy Lou Who — originally just the little girl who interrupts the Grinch’s wrongdoings to get a glass of water in the animated film — a main character in Grinch was genius. Her relationship with the Grinch could have been disturbing, but instead it comes across as sweet. It’s partly because of Cindy’s kindness and determination to have “everybody together for Christmas” that the Grinch is able to become a better person.

And it’s only after the Grinch sees that Cindy Lou Who is in danger that he finds the strength to save the presents in the sleigh in order to save her from toppling off Mount Crumpit. “Even if we’re horribly mangled,” the Grinch tells Cindy as they hurtle down the mountain with no breaks on the sleigh, “there’ll be no sad faces on Christmas.”

“Where Are You Christmas?” is a modern classic, and the moment you realize that Cindy Lou Who was played by Taylor Momsen, the more shocked you become. Momsen is best known for her role on Gossip Girl and, most recently, as a member of The Pretty Reckless, a hardcore rock band in which Momsen sings lead vocals.

The image is a contradicting one, but it’s also an incredibly amusing one. Sweet little Cindy Lou Who is all grown up and kicking ass these days, and that makes Grinch just that much more enjoyable. The Grinch undoubtedly approves of Cindy’s lease on life.

Equally uncomfortable and confusing is Martha May Whovier’s lifelong sexual attraction to the Grinch. The audience is first introduced to Martha May’s Grinch obsession as she’s shown flirting with him in school when they were children. She’s part of the reason Grinch rejects Whoville and the Whos, because he gets made fun of for his crush on Martha May and his inability to fit in with the other Who children.

At one point, the Grinch’s face ends up squeezed between Martha May’s ample bosom, and she shivers when he drags a furry finger over her bare shoulder. It’s all so cringe-worthy. But their relationship is also kind of nice. After all, Martha May is clearly considered the most beautiful, perfect woman in all of Whoville, and it’s wholly unexpected that she would pick the underdog Grinch over the Mayor.

2. Cindy Lou Who’s Family Is Everything

The tonal shift in the movie only comes after Cindy’s father stands up for her against the Mayor and the rest of the town. Cindy’s been trying to figure out why Christmas feels so wrong to her, and decides that it’s because everyone is too focused on the gifts and material things rather than appreciating what they already have. It isn’t until the Grinch steals everything after being accepted into Whoville once more that Lou Lou Who is able to see this.

“I don’t need anything more for Christmas than this right here: my family,” Lou says, driving home the film’s ultimate message.

1. The Grinch Is Ridiculously Relatable?

The Grinch is, at his base, a lazy, cantankerous, moping creature who hates socializing and eats just to have something to do. He often says the wrong thing at the wrong time and aggressively pretends not to care.

So, in the end, isn’t there a Grinch inside all of us?