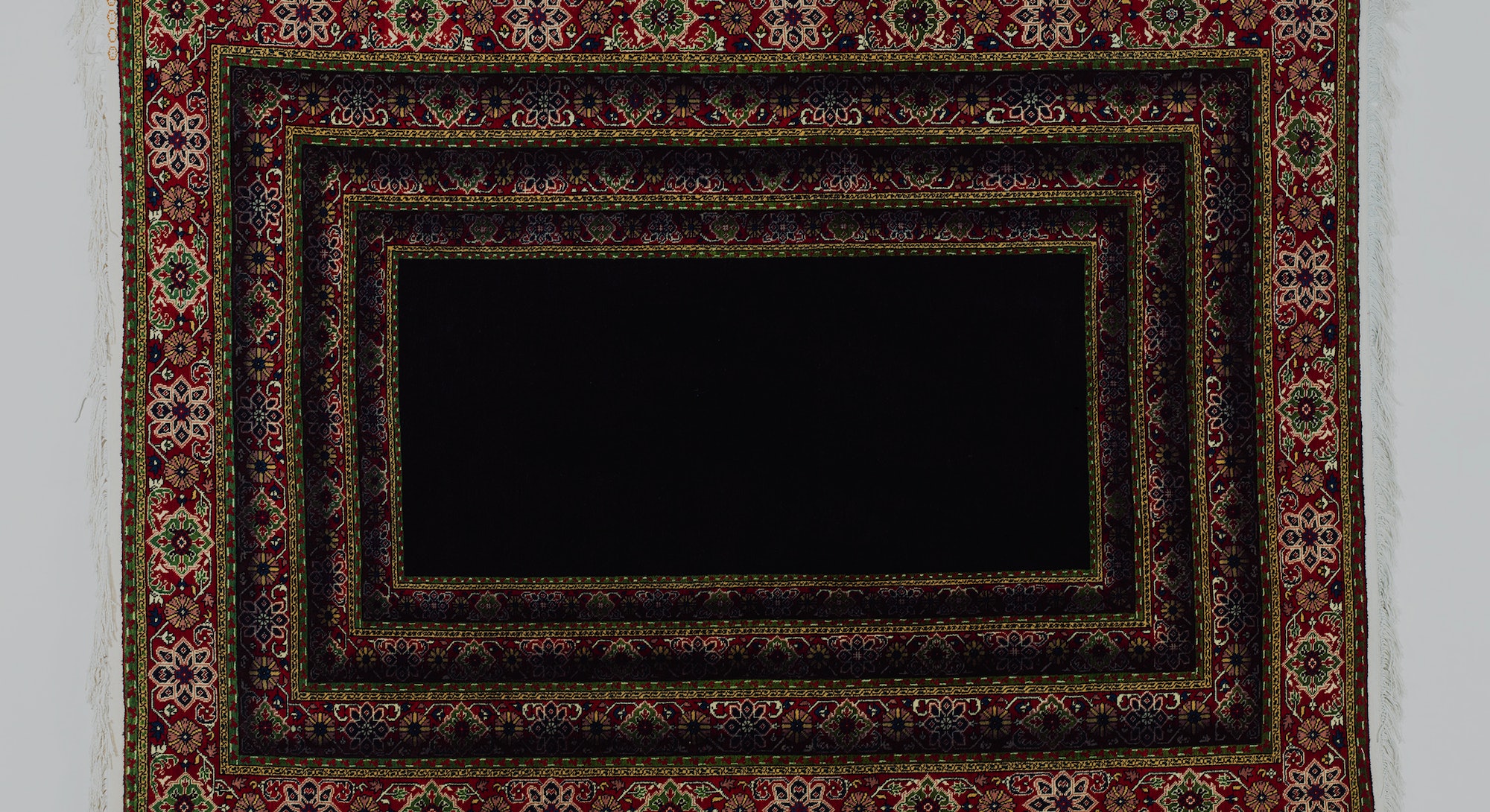 Halfway through his third cigarette, Azerbaijani artist Faig Ahmed begins to explain mutation. “There was some kind of mistake in DNA,” he says. “The first DNA was happy, then started to mutate. Mutation is something against structure — meaning something following some kinds of rules. But mutation is something that spoils these rules.”

Ahmed himself — born in 1982, in Baku, Azerbaijan — is determined to catalyze mutation. Over the past few years, he’s received international recognition for his distorted, intricate, hand-woven carpets. His desire to upend deep-rooted Azerbaijani traditions is controversial, to say the least: His first attempt to persuade village weavers to help him with his intellectual art project almost ended in blows. One man, who Ahmed describes in “natural terminology” as the “alpha,” told him that he had done “something very wrong,” and that, if he were to take his request elsewhere, he’d get less lucky. “They will kill you,” the man said.

From November 17 until January 15, 2017, Ahmed’s work will be on display at Sapar Contemporary in New York City. Each work is some disfigured, vandalized, or psychedelic carpet from Ahmed’s oeuvre, curated by Nina Levent. Together, Levent and Ahmed came up with the overarching theme and title of the exhibition: Source Code. In some works, the source code is DNA; in others, it’s subatomic particles; in many, it’s language, be it spoken, written, or programmed. But all works arise from within the artist’s own developed code, and from the context in which that code took form: Azerbaijan. But Ahmed’s code grew in complexity, beyond those borders, through exploration.

And not just physical exploration. Hence the psychedelia.

About 2,500 years ago, Azerbaijani communities began weaving rugs. The tradition developed over time, but remained confined by a set of simple, but stringent rules: Symmetry, for instance, was good, as were borders and well-defined centers. Rugs that strayed from these norms were not acceptable, and were excluded. The tradition was itself interwoven with societal and marital traditions: Women were expected to weave, and to include a carpet in their dowries.

These days, what was once a practice common to most small Azerbaijani villages has withdrawn to a few communities. Ahmed says they tend to be relatively insular, not unlike Hasids in New York City or Amish in Pennsylvania. Baku’s own extant weavers are among the best, but, when Ahmed approached them around 2006, they told him off. No argument nor monetary sum would convince them to destroy tradition, to branch out from their culture. They asked Ahmed if he was crazy, then told him to get lost. So he took to the country, where he found an acquiescent weaving community.

“I understood that they were living a life of replication,” Ahmed explains. He respected the weavers, but hoped they’d understand that they had an opportunity to develop, to evolve. There was no divergence, no mutation. Until Ahmed came along, tradition governed the weavers’ behavior and ensured that stasis prevailed.

Nowadays, almost a decade later, Ahmed thinks his team of weavers are happy, and happy to be “doing something new.” Sometimes, though, they’ll get halfway through a carpet and become enamored with the traditional. “When they start the traditional part of the carpet, they’ll say, ‘Oh, this is beautiful,’ and I’ll say, ‘Yes, let’s keep it going.’ But mutation-free carpets are a rare exception, not the norm.

Ahmed was the harbinger of change, the aberration, the deviant. “He tries to do what the rug refuses to do,” Levent says. He was the culture’s brilliant mistake.

Ahmed speaks either like a man enlightened or a man hallucinating. He’s long sought “altered states of consciousness,” Levent tells Inverse. The curator helped Ahmed fully understand the core, underlying idea that is implicit in all his work: We’re all the same, all programmed with the same source code. The resulting exhibition speaks volumes — if you’re willing to let your eyes listen.

“It’s something that you can’t explain with letters, with words, even with visuals,” Ahmed says. “But if you will connect everything, at the same time, then you will see the truth. You will understand this code.”

Ahmed is a tireless researcher, but his research, like each carpet, takes on various shapes. “When I’m doing my research, I’m looking for some interesting place where I can feel — I have to feel that I’m alive,” he explains. He’ll spend years studying and practicing a religion. He’ll spend months traveling in India, or South America, or some other foreign destination. He’ll spend a week delving into complex scientific literature, toiling to understand string theory. He’ll spend hours discussing philosophy with a stranger. No matter where he goes or who he speaks with, he believes the “code” remains the same — it’s just expressed in different fables, environments, terminologies, or languages.

The artist prefers not to discuss individual works, and says he has no favorite. Each carpet arose from a very specific mindset and experience in Ahmed’s life, so any retrospective explanation is, in a sense, anachronistic. “It’s very hard for me to go back to works, and speak about them again,” he says. “I can speak about experience, which for me is more important.”

In Ahmed’s view, an idea can only come from direct experience, and only to those with an open mind. It’s the only way people can make worthwhile mistakes, although, to Ahmed, mistakes aren’t so bad. “Even if we count it as a mistake, then it’s good — it means it will give a new way to living,” he says.

Despite all his carpet’s mutations — his attempts to bring forth the source code — Ahmed’s main focus remains consistent. He isn’t hubristic enough to claim he’s been able to fully define what it is in his art, but he has some ideas. “We’re all speaking one thing that’s very simple: We want to be just… happy,” he explains, adding that it’s a much more essential happiness than a desire to “just have fun all night.”

“It’s happiness that you can feel even when you’re sad,” he says. “If you have it, nothing will destroy you. Never.”

That’s just one perspective, one glimpse at the truth at which his art gestures. There are always more perspectives to explore. “If we look around, if we go deep, if we go far — everything is the same, approximately,” he muses.

“But between that, there is life, with one rule: create.”