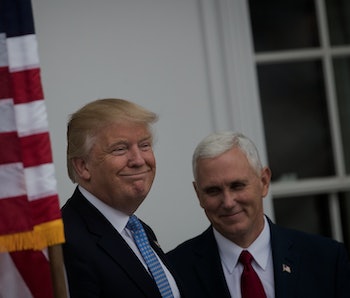 Nearly three-quarters of scientists from around the world said in a recent survey that they really, really don’t like United States President-elect Donald Trump’s position on climate change.

The study was conducted by the Science Advisory Board, according to Motherboard, and it polled about 2,500 scientists, with the vast majority living in North America, Europe, and Asia. About half said they are U.S. citizens.

Among those who voted in the U.S. election, 85 percent said they voted for Hillary Clinton, compared with 10 percent for Trump. Among all who answered, half said Trump will have a “very negative” impact on research and science in the U.S., and 72 percent hold a “very negative” opinion of his stance on climate change.

It should be said that this isn’t a scientific research study, and the results as presented appear raw and preliminary. The Science Advisory Board is essentially a market research firm that specializes in polling scientists and researchers. While the results have more methodological integrity than the online polls that Trump likes so much, it’s difficult to achieve a randomized sample among folks willing to respond to email questionnaires.

Still, the results point pretty clearly towards the fact that scientists see themselves in an adversarial position towards Trump and his policies, and for good reason. His pick to head the transition team for the EPA, Myron Ebell, is a climate change denier, and Trump has also promised to strip NASA of its Earth science and climate change programs.

The President-elect tried to make nice in a sit-down interview with the New York Times this week, however, a close reading of the transcript shows pretty clearly that the thing he has “an open mind” to is climate change denial, not climate change science. “A lot of smart people disagree with you,” he said, referring to people like Ebell who deny that climate change is human-caused, or a problem.

Unfortunately for the planet and all its inhabitants, the existence of people willing to ignore the risks of climate change for self-serving reasons won’t make it go away.

More like this
Science
Jan. 19, 2023
Time-lapse shows shocking temperature changes between December and January
By Jennifer Walter
Science
Jan. 19, 2023
NASA ends Geotail mission and more: Understand the world through 7 images
By Robin Bea
Science
Jan. 23, 2023
Elephants could be key to saving the planet — here’s why
By Tara Yarlagadda
LEARN SOMETHING NEW EVERY DAY.
Related Tags
Share: