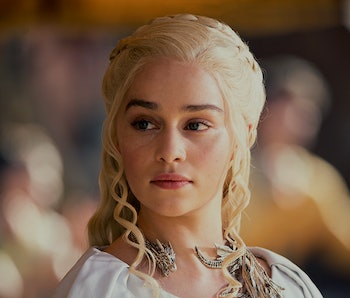 The Lannister and Dothraki armies are situated for a Westeros superpowers showdown, led, respectively, by the Kingslayer and the Mother of Dragons. Anticipation for Season 7 of Game of Thrones is high, and filming on Monday, November 21 marked the beginning of an enormous scene that looks to be pitting the red-wreathed Lannisters against the powerful Dothraki.

Filming for the scene occurred on the stone-studded hills of Los Barruecos park in western Spain. Twitter user HahPhi was on-site and took some hazy photos to post online. And, as always, GoT fans latched on to the set photos with the same ferocity as one of Dany’s dragons.

Most of the pictures show a gathering of soldiers in Lannister red — a result of the show’s recent extras binge — but two photos in particular are of special interest. The first is of two figures at the helm of the Lannister forces, and the other is of mounted Dothraki making their way across a field.

The two leaders are too far away in the photo to be absolutely certain of their identities, but the man on the white horse on the right is thought to be Randyll Tarly (James Faulkner) due to his bald head, so maybe Dickon Tarly is on the left. Neither are thought to be Jaime (Nikolaj Coster-Waldau) or Bronn (Jerome Flynn), though both actors were on the scene.

This potential Tarly sighting at the head of a Lannister army could mean that the Tarly forces have flip-flopped, changing its allegiance.

And the presence of Dothraki in Westeros can only mean one thing: Daenerys and her dragons are nearby. Knowing Dany, she’s going to want to enact some sweet, long-awaited revenge on Jaime (and his forces) for his hand in her father’s death — no matter how much Aerys truly deserved the title of “Mad King.”

Game of Thrones Season 7 is expected to premiere in summer of 2017.