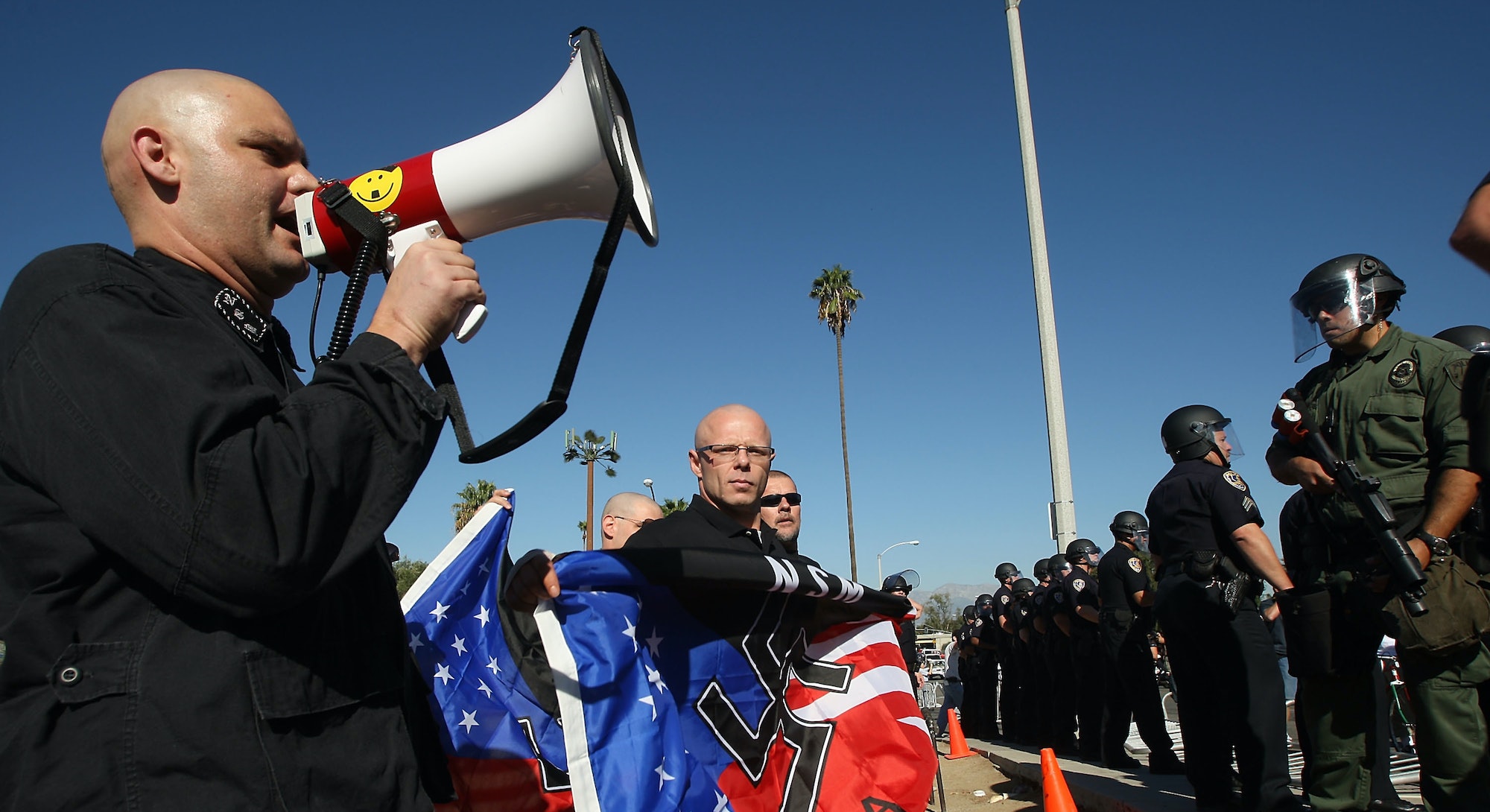 In February, California State University, San Bernardino Professor Brian Levin went to a Ku Klux Klan rally in Anaheim and saved a Klan leader from being bludgeoned to death. As the director of the Center for the Study of Hate and Extremism, Levin was acting in both a professional and human capacity. He views it as his job to attempt to understand the fundamental illogic of hate and to engage with extremism on a personal level. That cannot be done without risk.

With Donald Trump’s decision to hire a prominent white nationalist as his Senior Counselor and refusal to disavow the endemic American xenophobia he leveraged during a hard-fought campaign, racist groups are going public across the country. Rallies, speeches, and demonstrations have served as a stark reminder that hate is still politically unifying within certain communities. It has also served as a reminder that safety in numbers has proven to offer little safety at all for minorities in a rapidly browning country.

Levin urges people to engage with the new political reality, but not to take the risks he embraces. He doesn’t suggest sympathizing with racists, but he does believe that understanding where their ideologies come from is the first step toward dismantling them. One must look directly at the monster to understand its true form.

Levin spoke to Inverse about the white nationalism’s sudden ubiquity, the urgent need to bring right-wing conservatives into classrooms, and how America has rapidly regressed.

How do stereotypes form in the first place?

One of the things we know about how people approach other people is we tend to view our own group as diverse, and out-groups as homogenous — and oftentimes bad, in that homogeneity. Stereotypes are overgeneralizations about a group — often negative. And there’s often a grain of truth with them. This is something natural that we do to make sense of the world. We are bombarded with so much information that in order to organize it, cognitively, we use shortcuts. Oftentimes we approach information with biases — even implicit biases. We’re making moral judgments.

But there are shortcuts, and then there are hateful shortcuts. How do these form?

It’s really about the manner in which people assess information because they might not be well trained in how to analyze it, and then they rely on more instinctive, impulsive assessments.

When people are fearful or angry, they’re more likely to revert back into a defensive or ‘in-group’ manner of looking at the world. What we’re seeing, as a sociopolitical phenomenon in Europe and the United States, is this notion of nationalism, which then can lead into Euronationalism, which is often bootstrapped into white supremacy.

What fears are driving the extremists in America to revert to these instincts today? Say, the so-called ‘alt-right’?

Many people are, rightfully, concentrating on the horrid, bigoted aspects of the ‘Alt-Right.’ But I want to provide a value-added analysis beyond name-calling. What were some of the motivations behind the emergence of the ‘Alt-Right’? It was to dismantle what they thought was an illegitimate political structure. Which just happened to dovetail with the fears and frustrations of many disenfranchised Americans: an ascendant mortality rate, there’s no job growth, and they believe the institutions which have plummeted in trust have left them behind, or worse, sold them out in self-dealing that elevates folks who do not have American interests at heart.

I think it’s interesting, with respect to non-college educated white Americans, they are the only group with an ascending mortality rate. Not only that: If you look at the job growth that has occurred across that whole cohort, it’s only like 80,000. We can look at history as some kind of guide.

So this has happened before?

Let’s look at the 1920s. We just came out of a brutal international conflict where the whole order of the world drastically changed. What did we see at home? Massive immigration. We also saw a change in lifestyle issues. We were shifting to an urban-based industrial economy from a rural agrarian one. We also saw migration of African-Americans along with great immigration. And what did we see within that? We saw jazz, a year of decadence, alcohol use, and it changed the small-town, agrarian, Protestant traditions that were part of what previously defined America. We saw this strange group of foreigners who adhered to a religion that was based in the Vatican, they spoke a different language, and they seemed very insular. During times of change, people are often fearful.

How does the present day mirror that?

Well, what else are we seeing now? In the ‘20s, it was Prohibition, now it’s legalization of marijuana. Cultural changes, like gay marriage and other things. We are a divided country. In the past, we had more unified institutions to tie us together. There’s a rise of the unaffiliated — not atheists and agnostics specifically — but even bigger than that growth has been those who adhere to faith but not to an organized one. Periods of change can be very disquieting.

So people who feel left behind by that change are finding unity within extremism.

Hardened racists have coalesced and gelled behind Trump in a manner I haven’t seen in my professional career. [But] the ‘Alt-Right’ did not get traction from bigotry alone. Many think it’s more important to dismantle the institutions they think has become illegitimate. The fact that the ‘Alt-Right’ has bigots within it — maybe even controlling the alt-right movement — is a testament to how open it is. You laugh, but if you’re afraid to speak out at your college class, or feel that at work you’re being passed over and you aren’t heard, then at least, hey, I get to be part of the debate here. Within the hodgepodge, you have people like Milos Yiannopoulos, who is overtly gay. Just the ability to say, ‘I’ve had it!’ — even though they come from different perspectives, binds them together. And the genesis of the alt-right was to dismantle the conservatives and the illegitimate Republican party. And they did.

Why are these people suddenly all coming together now?

As someone who has watched the ‘Alt-Right’ be able to coalesce — a ragtag, cobbled assortment of hate groups under one umbrella, at least temporarily — it’s because they had a charismatic leader. I’m not saying President Trump is a hardcore, intentional bigot, but he appeals to those that are. Part of that is that they now have someone who is a celebrity brand who is embraced by the media, who will take messages and conspiracy theories that were previously segregated into the extreme world well into the mainstream. No other Republican candidate would have embraced some of these conspiracy theories.

What can we gain from listening to extreme arguments if so many of them are driven by hate?

We now have the ability to understand how prejudices gel, and we can respond to that. We know that meaningful contact with people who are different, as Gordon Allport wrote many decades ago, is important. Education can also help.

Meaningful contact seems increasingly impossible as America splits into hardened factions. How can we make this happen?

Donald Trump may not be the unifying agent — we don’t know. It may have to come from people at the lowest level, like myself, who say, ‘Let me find a conservative speaker of good will to talk to my class, and let me make that institutionally part of how I train my students to critically think.’

What we need is a marketplace of ideas. A quiet and dialogue-driven place to shop, where there is truth in labeling and transparency. That’s what I think I bring to my university classes. I want to make that national and put it on video. I want to get people who, in most cases, other people would never sit down and talk to them. A Muslim professional. A highly educated evangelical Protestant pastor. The only ground rules I have are civility.