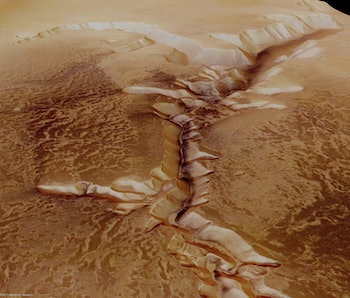 Russian scientists have announced their desire for an international partnership that would have cosmonauts (Russian astronauts) on Mars within 30 years. On Tuesday, Dr. Igor Mitrofanov, Head of the Space Gamma-Spectroscopy Laboratory of Russia’s Space Research Institute, [told Russian News Agency TASS (http://tass.com/science/913864) that a collaborative effort was the best path forward, considering the enormous financial and technological demands of a manned mission to Mars.

Russia is already working with the European Space Agency on the ExoMars mission to find signs of life on the Red Planet. ESA would seem to be a natural fit for working with Roscomos (Russia’s space agency) on a crewed Mars missio. But ExoMars has already seen delays of its own in addition to one pretty explosive failure.

Russian scientists know the inherent obstacles to a crewed mission will be even greater. “A manned expedition to Mars is not an easy task. In my estimate, technically we’ll be able to implement it approximately in 2040-2050. This Martian expedition will most probably be performed on the basis of consolidated international efforts,” Mitrofanov told TASS.

Russia has been scaling back its investment in other space projects, so this announcement is an encouraging sign that constraints on resources and budget haven’t put them off their investment in space travel entirely.

The United States, meanwhile, might have its first manned Mars mission in less than a decade thanks to Elon Musk and his aerospace company SpaceX, though of course that timeline isn’t guaranteed.

Plus, we don’t know for sure whether that mission would actually put American astronauts on the planet’s surface or simply keep them in orbit. For now, we’ll all be spending a little more time wondering if it’s possible for Russia to actually beat us to Mars with a crewed mission after all.