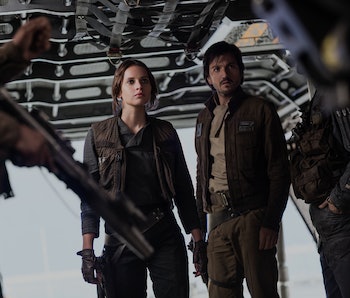 The best way to fight a rebellion is to make some rebellious friends first.

We basically know Rogue One hero Jyn Erso’s entire backstory — abandoned by her father at age 15, eventually leading her into a life of crime, which gets her enlisted by the Rebel Alliance on the mission to steal the Death Star plans — but the backgrounds of the other characters rounding out her squad have been a bit one-note. Chirrut, Baze, and Bodhi are out for varying degrees of revenge, while Cassian Andor seems like he’s just a strict Rebel officer making sure this motley crew sticks to the mission. But now a new TV spot sheds some light on Cassian’s motivation, and makes him out to be a bit like Jyn.

Over super bombastic music and a majority of footage we’ve seen before, we still get a better sense in this extended TV spot of who Cassian is than in all of the previous trailers and clips combined. We’ve known he’s been recruiting for the Rebellion for a long time, which in the Empire-dominated era of Rogue One must be a tiring line of work. Occupational strife is all well and good, but what about Cassian the human being?

In one moment Cassian utters, “I want to help,” and in another says, “I could not face myself if I give up now.” We see a bunch of shared moments between he and Jyn, with her saying, “I’m not used to people sticking around when things go bad,” and him responding, “This is a first for me.”

So, Cassian is essentially the male version of a loner like Jyn, except he’s probably been continually defeated by the grind of trying to defeat the Empire. Jyn comes in to go on this mission to galvanize the entire operation — or, as Saw Gerrera says, to “Save the dream!” — and Cassian finally meets his match.

The hope is that some romance isn’t shoehorned in the story. We’d prefer this to be a Mad Max and Furiosa-type relationship instead of Han and Leia. We’ll find out when Rogue One hits theaters on December 16.