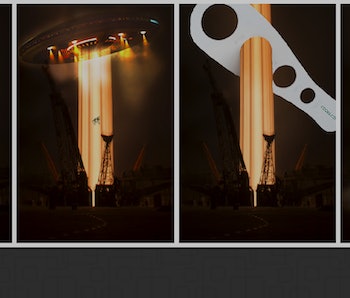 On Thursday afternoon, three astronauts including the oldest woman to go to space blasted off from the Baikonur Cosmodrome in Kazakhstan on a mission to the International Space Station. NASA’s top photographer Bill Ingalls took a long exposure shot of the launch and posted it to the agency’s official Instagram page. And then the internet took over. Ingall’s image ended up at the top of Reddit’s /r/photoshopbattles

Rocket launch photography is a huge, awesome hobby for a lot of amateur space enthusiasts. Ingall, of course, does it for a living, but others like 16-year-old John Kraus do it for fun. And then, if they’re lucky, people photoshop the shit out of their pictures into some truly hilarious designs. Ingall’s shot was a great jumping off point for a photoshop battle, because it’s pretty spectacular in its own right. The long exposure makes the rocket’s burners look like a gigantic beam of molten light rocketing into the sky.

But here’s what Reddit did to it. Brace yourself, it’s pretty ridiculous.

We’ll start off pretty standard, with /u/InsideDK’s flawless photoshop of a flying saucer.

FoxQT took that and made a reference to the latest South Park episode.

Yep, and then aphaits went ahead and made the whole thing into a churro.

And of course, a giant beam of light wouldn’t be complete without multiple instances of Goku from Dragon Ball Z going Super-Saiyan in it. KulpDontCare’s version is the best, in our opinion, but you can check out those and many, many more ridiculous photoshops of the launch right here.