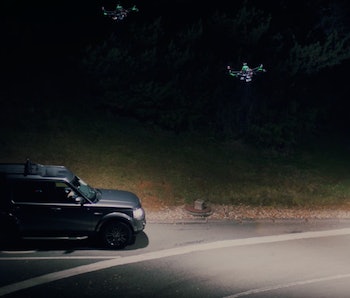 Imagine a pack of autonomous drones swarming together to relentlessly follow people in the middle of the night. It might sound like a nightmare, but insurance provider Direct Line’s new Fleetlights service is actually meant to bring peace of mind to anyone walking, running, or driving at night by illuminating their paths with LED flashlights from above.

Fleetlights consists of two types of drones that work together. A group of 15 quadcopters with a maximum speed of 33 miles per hour armed with one flashlight fly alongside five six-engine hexacopters that can travel up to 60 miles per hour while carrying three lights. While that might not be as impressive as Disney and Intel’s drone swarm, which boasts a swarm of 300 drones lighting up the sky over Walt Disney World Resort in Florida, the tech could serve a much more important function.

Direct Line marketing director Mark Evans tells Inverse that Fleetlights is part of the UK insurer’s attempts to revolutionize insurance. “The business of insurance will stop being about restitution and will start being about prevention,” he says. “Bitcoin, A.I., connected homes, driverless cars, sharing economy, all of these things lead us to believe that ultimately we’ll move into a prevention stage.” Fleetlights was borne from that belief and a simple statistic: There’s a 42 percent increase in deaths and injuries during the darker months.

Others have found similarly worrisome problems. One paper said that more than half of all traffic deaths in the European Union occur after dark even though fewer people drive after sunset. Pedestrians are also between three and seven times more likely to be killed by drivers in the dark. These figures drop, however, as days start to get longer or overhead lighting is installed to help people be more aware of their surroundings when they go for drive after nightfall.

Not that driving after sundown is the only worry. Another study, Good Lamps Are the Best Police: Darkness Increases Dishonesty and Self-Interested Behavior, found that people are more likely to be dishonest in rooms with dimmed lighting or when they wear sunglasses. This hearkens back to previous findings that criminal assaults largely occur at night and dark rooms promote aggressive behavior. Things really do go bump in the night; the best defense against them is to make sure you have your own light.

That’s where Fleetlights comes in. A prototype of the service allows people to summon the drones with a smartphone app. The quad- and hexacopters then use military technologies to find their location within a few millimeters, communicate via mesh networking, and use dynamic waypoints to respond to whatever they’re supposed to be following. The result is a system where drones can stay in formation while ensuring that their subject remains illuminated. (The fleet can also be controlled by someone in a mobile dispatch center.)

Fleetlights drones were tested in August in Petworth on the South Downs, which Evans described as the darkest part of the United Kingdom. The demo was scripted. He tells Inverse that the audience would see the drones in action then scurry into a building to watch a video about what they just saw, but it still showcased the tech’s capabilities. Evans says the night went off without a single hitch, which is unusual for new product demonstrations, and the insurer remains committed to seeing the Fleetlights project through.

Direct Line would eventually like to improve Fleetlights with advanced collision detecting, which could remove the need for waypoint mapping, and install hydrogen power units instead of lithium-based batteries. The company has made the technology open source, which means other developers can use its designs for themselves or contribute to the platform. This isn’t just a concept — Evans tells Inverse that it’s the first of Direct Line’s efforts to use technology to bring the insurance industry back to its older, more noble roots.

“Insurance as an industry started out as something really good in the world. The notion was that it was the many looking after the few. That’s a societal good,” he says. “In many cases, particularly in the UK, it lost its way and became known for being not-very-nice to consumers and looking after its own interests a bit too much. This is the next era of how we revolutionize the sector into something which is absolutely respected and valued, and that’s good.”

Direct Line has already received some inquiries about using Fleetlights in search-and-rescue operations. Drone swarms are well suited to those tasks: They can reach areas that larger vehicles can’t, and while other drone swarms just allow for easy monitoring, Fleetlights could provide some comfort to people in danger while also making it easier for emergency responders to conduct their operations in the dark.

Fleetlights is currently a prototype, and Evans tells Inverse that the product won’t make its commercial debut any time soon. The United Kingdom, much like the United States, is still trying to figure out how to regulate drones. The tech is also moving so quickly that Direct Line hasn’t even attempted to figure out how much a service like Fleetlights might cost. But he says that none of these obstacles have dampened the insurer’s commitment to the project.

More like this
Gear
Jan. 19, 2023
This sleek e-bike may be more than just a Super73 knockoff
By Jackson Chen
Gear
Jan. 31, 2023
Why Mercedes-Benz’s Self-Driving Milestone is a Big Deal for Autonomous Cars
By Jackson Chen
Gaming
6 hours ago
Nintendo Direct rumors reveal the blurred lines between guesses and leaks
By Willa Rowe
LEARN SOMETHING NEW EVERY DAY.
Share: