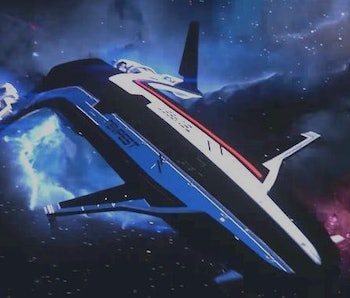 The newest starship in the Mass Effect universe will have some of the familiar hallmarks of the original trilogy, but the Tempest is going to be a little bit sleeker, complete with some Tron and Oblivion roots.

Joel MacMillan, Art Director for Mass Effect: Andromeda, spoke to the process of designing for an all new period of Mass Effect in a [recent interview with Game Informer. MacMillan highlighted the importance of bringing back the “iconic imagery” of the original trilogy while giving fans something new to love.

Fans will likely find plenty to be excited about with the Tempest and the Nomad, our de facto Normandy and Mako respectively, but expect to find some new elements folded into the instantly recognizable Mass Effect aesthetic.

“If you look at some of our ship designs in the game today, you can see some visual tethers that go back to the Citadel from Mass Effect 3,” said MacMillan. “That was a very strong piece of imagery from Mass Effect 3, so we wanted to retain the essence of that but spin it in a new way.”

Vehicle Designer Daniel Simon, who worked on Tron: Legacy and the Oblivion film, brought some fresh perspective to the game. And though the Mass Effect: Andromeda team didn’t end up implementing all of his ideas in the game (for instance, a top-loading cargo bay on the Tempest that essentially used the ship’s fuselage as a massive ramp), there are flourishes that may end up becoming cornerstones of the next era of Mass Effect.

Equal parts a source of excitement and contention among fans, a Mako-like IFV (infantry fighting vehicle) is coming back in Mass Effect: Andromeda and restoring some of the sandbox-y element that some fans missed in the franchise’s later installments. The Nomad is an updated version of the Mako, trading its clunky battering-ram-on-wheels appearance for something a little sleeker and more refined. It still has six massive wheels and looks like it’s fully prepared to suffer all manner of otherworldly abuse, but looks significantly less likely to drive like a hog on ice.

Mass Effect: Andromeda is scheduled for release in early 2017.