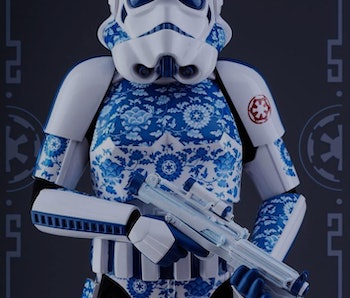 Stormtroopers, the elite soldiers that make up the bulk of the Empire’s military might, totally suck at fighting. The iconic Star Wars goons are rarely a threat to the heroes, who casually shoot them with a blaster or cut through them like butter with a lightsaber. So it’s fitting then, that a limited edition action figure gives stormtroopers porcelain armor, so they’ll finally look as fragile as they are in Star Wars combat.

The 1/6 scale action figure was created by Hot Toys, a company known for creating dolls that with uncanny realism. They’ve made lots of Star Wars action figures before, but this one might be the prettiest … and unintentionally funniest.

“As the symbol of the Empire’s sweeping military might, the stormtroopers have a presence in all but every corner of the galaxy,” Hot Toys said on its Facebook page. “As a special edition release, Hot Toys reimagines the iconic white battle armor in an original design variation representing different cultures and civilizations.”

This delicate stormtrooper was inspired by “the highly regarded blue-and-white porcelain motif that originated centuries ago in China,” according to Hot Toys.

The figure is selling for upwards of $200.

In the movies, stormtrooper armor appears to offer about as much protection as this guy’s detailed porcelain shell would. The only real difference, perhaps, might be that a porcelain helmet would’ve broken after knocking into a doorframe on the Death Star.

Rogue One will feature new types of stormtroopers, including some very menacing all-black ones. They’ll probably pose a greater threat to the rebels than these china troopers would.