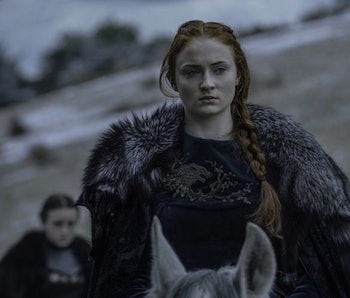 Although Sansa and Jon Snow had a heartwarming and unifying reunion in Game of Thrones Season 6, their future is dark and full of terrors for Season 7.

Season 6 ended with Jon being hailed as the new King in the North while Sansa exchanged a furtive, inscrutable glance with Petyr Baelish. Baelish had just told her of his intention to claim the Iron Throne with Sansa as his queen, and though she shot him down, the look implied that she wasn’t as dismissive of power as she seemed. A Starkbowl clash between Sansa and Jon could be on the horizon for Season 7, and a new video from the Season 6 extra features supports this.

In it, Sophie Turner as Sansa narrates the history of the North, give or take Season 6’s failed theory of the Grand Northern Conspiracy. Most notable is the ending where she explains the meaning behind the ever-present phrase, “The North Remembers.”

Granted, she is referring to the Boltons, not Jon. But she sounds queenly as hell and not inclined to include Jon in her plans when she says of the Bolton’s reign, “I shall correct that mistake.”

Sansa has had one of the most dramatic character arcs on Game of Thrones, and it would certainly be fitting for conflict to arise from an unexpected place right when all seems calm. We’re all looking to Daenerys and Cersei as the sources of discord in Season 7, but don’t discount Sansa Stark. She’s nobody’s little bird anymore.