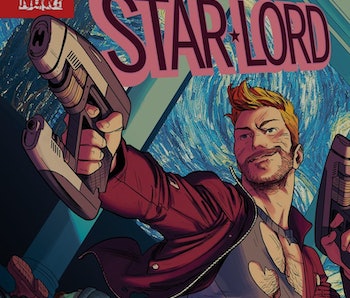 Marvel’s Guardians of the Galaxy are stranded on Earth without their ship or each other. And since the team has broken up, one member, their leader Star-Lord, has decided to live the life of an unemployed hipster on Earth. At least, that’s the impression we get from these previews of the new grounded Star-Lord #1.

Written by Chip Zdarsky and illustrated by Kris Anka, the new Star-Lord comic features a depressed, lonely, and perfectly chiseled Peter Quill as he tries to adjust to life on Earth, a planet he hasn’t lived on since he was a kid. The only problem is that since the Guardians aren’t talking to one another, he has to rely on the not-quite-kindness of Alpha Flight agent Abigail Brand who has no time for his shit — that and the stylish tank tops with hipster appeal he’s forced to wear. Basically, Quill is your average young adult living in New York City.

He’s drinking beers at 11 in the morning, milling about shirtless, and wearing rolled up sweatpants; just look at this hipster.

Kris Anka has been teasing his decidedly more handsome Peter Quill for months on his personal Twitter account.

As it turns out, the only two other people Star-Lord- er, Earth-Lord knows on the planet is his ex-girlfriend and Howard the Duck (formerly had a comic written by Zdarsky). Howard naturally tells Quill straight up to blow it with some surprisingly applicable advice, telling attention-deficient hipsters everywhere what they should do for the love they so desperately want.

Basically, if you want to see one of the Guardians live the urban millennial lifestyle, it’d be best to check out the new Star-Lord when it hits comic book stores and digital retailers December 21, 2016.