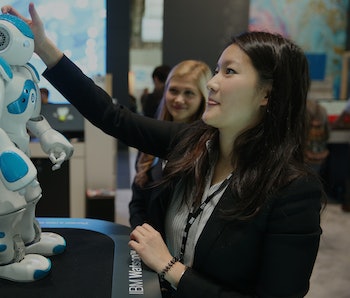 IBM wants to make the connected products, robots, and other gizmos of the future as smart as they can be — and it’s Jeopardy!-champion robot Watson could help make it happen. That’s why the company announced last week that Watson will be made available to more developers than ever thanks to Project Intu. If people take advantage of this program, Watson could make sure their supposedly “smart” products aren’t quite as elementary as they are now.

Watson has already been used to do everything from enable robot concierges to help a professor at Georgia Tech manage the online forums of his A.I. course.

Project Intu is supposed to expand Watson’s influence even further. IBM said that the platform “enables devices to interact more naturally with users” by “triggering different emotions and behaviors” in response to stimuli. This is supposed to “[extend] cognitive technology into the physical world” by making internet-connected products more clever than ever.

IBM isn’t alone in these efforts. Amazon is offering up $2.5 million in a competition to teach Alexa, the A.I. that powers its Echo products, how to hold a conversation for 20 minutes. Both companies are basically trying to make A.I. seem less robotic so more people will be comfortable interacting with it.

They’re also targeting a growing market. The IDC research group said that 75 percent of developers are likely to include A.I. of some sort in at least one product by 2018. The question is whether those groups will tap Watson, Alexa, Google’s DeepMind, or some other service to provide those A.I. capabilities.

Project Intu could help IBM make sure those developers choose Watson. An experimental version of the service is available now, and the company said it’s going to use early feedback “as the basis for further refinements” as Project Intu moves closer to a beta release. Watson is about to get a lot busier.

More like this
Innovation
Jan. 19, 2023
A robot choreographer reveals why M3GAN — and all robots — should dance
By Molly Glick
Gear
Jan. 19, 2023
Why Apple's rumored smart display could be doomed from the start
By James Pero
Innovation
Jan. 25, 2023
Starship orbital flight: SpaceX successfully loaded the rocket with over 10 million pounds of propellant
By Mike Brown and Molly Glick
LEARN SOMETHING NEW EVERY DAY.
Related Tags
Share: