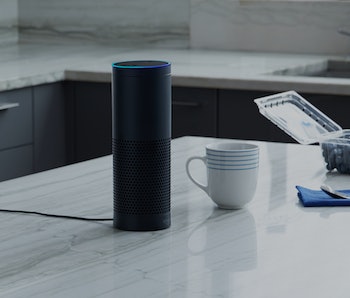 Amazon is hosting a university competition to see how students might be able to make Alexa, the virtual assistant inside Amazon Echo, a better conversationalist.

The company announced the first annual Alexa Prize in a Thursday blog post. Students will be able to apply for the competition until October 28. If they are sponsored, Amazon will give them $100,000 and the chance to win an additional $500,000 if their project is declared the winner.

Amazon is giving the students until November 2017 to create an artificial intelligence capable of “conversing coherently and engagingly with humans for 20 minutes.” If they manage to do so, an additional $1 million will be awarded to their university. (The winning team does not have to meet this goal; it’s simply a bigger prize for conquering what Amazon is describing as its “grand competition.”)

Jeff Bezos has previously said that Alexa was inspired by Star Trek. That comparison was drawn again in the announcement of this competition, when Amazon Web Services chief evangelist Jeff Barr said the company wants Alexa to be as fluent as Star Trek’s LCARS operating system.

That requires a lot of testing, and Amazon will help make sure the students have what they need. In addition to partnering with publishers to offer access to their data, the company will also put the “socialbots” in front of real Alexa users. “After each conversation concludes Alexa users will provide feedback that will help the students to improve their socialbot,” Barr said in his blog post. “This feedback will also help Amazon to select the socialbots that will advance to the final phase.”

The idea is to make Alexa seem more human. This, in turn, could help Amazon Echo and the smaller Amazon Echo Dot become even more popular with Amazon’s customers.