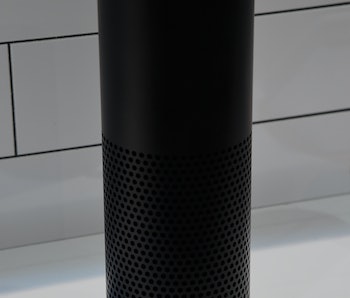 Amazon Echo, the voice assistant that sits in the corner of a room, may seem like a straightforward evolution of smartphone assistants like Siri. But for Amazon CEO Jeff Bezos, it’s almost the realization of a childhood dream.

“Our vision was that, in the long term, it would become like the Star Trek computer,” Bezos told the Washington Post “Transformers” conference audience on Wednesday. Bezos and his friends, growing up in Houston, Texas, would play Star Trek every day, fighting over who got to play Spock, who was Captain Kirk, and who pretended to be the computer.

Bezos explained that Echo’s value lies in being able to do things better than smartphones and desktops. Controlling the Internet of Things-connected household through a voice assistant is far easier than whipping out a phone, tapping on an app, waiting for it to load, and setting the controls. “The phone is not the right solution for every problem,” he said.

Instead, somebody in the room can say “Alexa, turn the temperature up by two degrees,” and the Echo turns up the thermostat. “It’s a very natural way of interacting in that kind of environment,” Bezos said.

These advancements in natural language recognition are only going to get bigger over time. Bezos said that he believes humanity is currently in a golden age of machine learning and artificial intelligence development. “We really are at a tipping point where the progress is accelerating,” he said.

There is still plenty of progress to be made, however. Bezos cited the AlphaGo artificial intelligence as an example. The A.I. AlphaGo needed to play through millions of games to learn how to play Go at a competitive level, while human players only needed to play thousands of games to reach the same skill level.

Human brains also require a lot less power than A.I. AlphaGo needed thousands of watts to work, but the brain only uses around 50 watts. In terms of power and intelligence, there’s still a long way to go before computers can reach the same level as the ones in Star Trek.