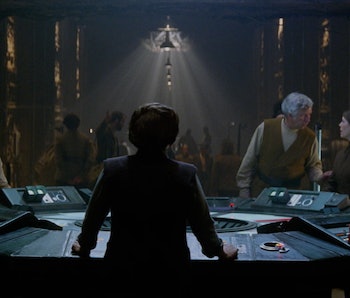 In The Force Awakens, even hardcore Star Wars fans didn’t understand what was going on when the mysterious governing body known as “the Republic” was obliterated by Starkiller Base. But, before the Hosnian system was destroyed, did some politicians and aristocrats survive? New rumored character details for Laura Dern’s role in Star Wars: Episode VIII could suggest that the new film will clear up all that vague Republic stuff.

Making Star Wars describes Laura Dern’s character as “bombastic,” and explains, “She is very aristocratic and fancy in a way we haven’t really seen in Star Wars before.” This has led to comparing Dern’s unnamed character to the eccentric Hunger Games character Effie Trinket.

Now, beyond surprising aesthetics (Star Wars hasn’t done ornate, aristocratic style since Amidala’s Episode I makeup), one takeaway is that Laura Dern’s character doesn’t sound like a Resistance fighter, but is nonetheless affiliated with the good guys.

The political reality of The Force Awakens suggests that the Republic couldn’t — for some reason — openly support the Resistance against the First Order. Some of this is because Leia lost public political support because of her family ties to Darth Vader. Though, there also could be other reasons: i.e. Ben Solo becoming Kylo Ren. In any case, none of this was explained clearly, and the political status of the galaxy remains murky.

If the Republic, pre- The Force Awakens, was anything like the Republic of the Star Wars prequels, it must have made big decisions for its member planets as to which resources went where. The classic Star Wars trilogy vaguely asserts that the Rebels relied on rich connections to get funded in the first place: I.E. Leia and her adoptive father, Bail Organa of the planet Alderaan, helped the Rebellion buy weapons. The old Star Wars radio drama supports this, as do the new in-canon Rebels episodes, since they show Leia using her legit connections to obtain ships for Phoenix Squadron. Similarly, Mon Mothma was a politician before becoming the leader of the Rebel Alliance. Could Dern be the Mon Mothma of the new films?

The Resistance probably needed some kind of similar political and/or financial support. If Laura Dern is an “aristocrat,” perhaps that means she is a wealthy benefactor, or a former member of the New Republic’s Senate. Earlier rumors have suggested that her character clashes with Poe Dameron, but maybe it’s not a matter of military rank, but instead, political privilege. And if Dern’s character is connected to the machinations of this new version of the Star Wars political landscape, hopefully those stakes will be more clearly defined than they were in The Force Awakens.

Everybody is all about restoring peace and justice to the galaxy, but figuring out what that means, specifically, could help to make the First Order scarier, and Leia’s role in the Resistance crystal clear.