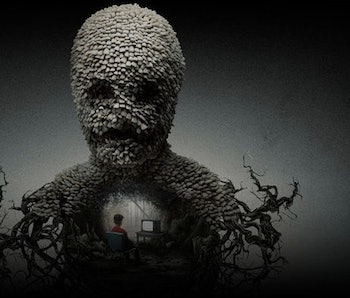 The first season of Syfy’s creepypasta anthology series Channel Zero was deeply unsettling, and combined with its devotion to abstractness, it will likely go down as one of the best horror shows on TV. And fans of creator Nick Antosca’s series hoping for all the loose ends to be tied up when the credits rolled at the end of the season finale should have realized from the beginning they were watching the wrong show.

From the start, Candle Cove was more concerned with creating in audiences the sinking feeling one gets in the pit of his or her stomach when everything they thought they knew turns out to be wrong.

The big question leading into the finale never really gets a big reveal: Why is the unnerving children’s show within a show, Candle Cove, showing up and brainwashing the children of Iron Hill? As with most of the haunting happenings on the show, the short answer involves Mike’s dead brother Eddie and, by extension, the evil Mrs. Booth. The long answer gets a bit complicated, so take a deep breath.

Mike and Eddie were born with a sort of preternatural telepathic sight that allowed an evil power that Eddie calls the Skin-Taker to take over Eddie’s consciousness. The pious Mrs. Booth, who’s prone to seizures, recognizes Eddie’s growing power when he eradicates her epileptic fits and sacrifices her son Jacob because, as she eventually tells Mike and his mother Marla in Episode 5, she found herself “in the presence of something greater.”

To progressively satiate his evil power, Eddie creates Candle Cove as a way to mesmerize the fellow kids of Iron Hill before killing them. Seeing no other course of action, Mike kills Eddie before he becomes too powerful. Cut to 30 years later, Mike returns because Eddie’s power has grown so strong that he can both haunt Iron Hill in the form of a grotesque demon composed of children’s teeth and possess kids (like Mike’s daughter Lily) via Candle Cove. His ultimate plan: take over Mike’s body so he can live again.

Ultimately, Mike finally confronts Eddie and the Skin-Taker in a dream-logic netherworld, outsmarts Eddie and strands them both there, stopping Eddie’s reign of terror on Iron Hill.

It’s kind of a let-down spelling it all out like that, because Channel Zero’s biggest strength was that it teased all of the creepiness out over its six episodes, all of which were deftly directed by Craig William Macneill. They were about atmosphere and gradually letting the audience into a mystery one disturbing detail at a time, like a Michael Haneke movie without any implicit meta-techniques messing it up.

It was a season that undoubtedly benefitted from a limited and patient story window. Stretching it to seven or eight episodes — despite the gorgeously composed, almost Kubrick-like visuals by director of photography Noah Greenberg — might have made such a deliberate show into an overly drawn-out one. But because that was not the case, we could focus on both the story and the gorgeous visuals. There’s some indelible horror imagery embedded in all of the terror. From the Tooth Child, to Mrs. Booth’s flock of children gazing into Candle Cove, to Jess’s shocking murder, to the crude Candle Cove puppets like Jawbone that manifest themselves into the Skin-Taker; it’s unforgettable stuff, even when you can’t explain it all. It brings to mind the lush surrealism of David Lynch and Twin Peaks, especially when Mike ventures into the finale’s unreal hallway rooms that lead him to Eddie and the Skin-Taker.

Candle Cove never leaves you unsatisfied, but instead leaves you wanting more. This story, though, is finished; the show’s second season will feature a completely different story based on another creepypasta called The No-End House. But that’s why it’s worth keeping up with Channel Zero. Such care, from the visuals of the story, of the genre, and more were put into the first season that a constantly shifting anthology framework will force it to stay equally fresh and iconic. It’ll haunt you, but for good reason.