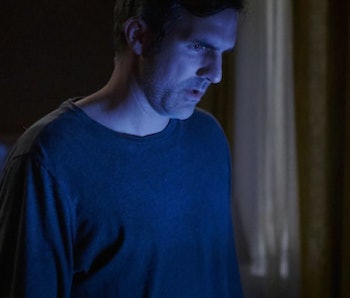 Nick Antosca is confident that the final two episodes of his Syfy horror anthology Channel Zero will shock and surprise viewers, as its central mysteries slowly come into focus.

The show’s fourth episode marked the beginning of the end of the season, bringing with it seriously deadly results. Doting mother Jess was brutally murdered by Mrs. Booth’s group of brainwashed kids from town; Mike’s daughter Lily might finally be free from the possessed spirit of his dead brother; and newly appointed Sheriff Amy is about to get saddled with a whole mess of macabre problems in the formerly sleepy town of Iron Hill. There’s no telling where these characters will end up, and that’s how Antosca wants it. “I don’t think you’ll see anything like it on any other show,” the Channel Zero creator told Inverse during a conference call, referring to the finale. “It’ll be a distinctive and bizarre episode of TV.”

Distinctive and bizarre has been the operative words to describe the show so far. The story focuses on Mike Painter (Paul Schneider) who returns to his childhood home to reopen an investigation of a string of murders in the 1980s. His younger brother was amongst the victims of a killer who may have somehow been connected to or inspired by a mysterious children’s TV show. But the show has approached its horror genre subtext by being steadily unsettling, using the mysteries of things like the malevolent entity covered in the teeth of dead children — dubbed the “Tooth Child” — to its advantage.

“In the show it represents childhood, baby teeth, the loss of innocence,” Antosca said of the creepily iconic character. “But it’s more about what feels true and disturbing, and what has a kind of nightmare logic to it, and then unpacking the symbolism behind what you know is already powerful.” That underlying understanding of what’s going on goes for the show as a whole as well.

Channel Zero uses perfectly placed misdirection to its advantage, but it has been punctuated by moments of ultra-violence. It’s something Antosca and the show’s sole director, Craig William Macneill, set up to play into the last couple of episodes.

“Both of us are much less interested in detailed explanations than we are in the psychological experience of just watching the show,” Antosca explained. “In Episode 4, if we were to have characters say ‘Here’s the plan,’ and then show them carry out the plan, it’s just not as interesting as seeing Lily whisper in her father’s ear and find out later what she whispered. It’s more important from a character perspective to see reactions and experiences than it is to hear explanations.”

But something they did show was Jess’s death, which was a major turning point in the season so far, for both viewers and in the cryptic subtext of the show. It’s all part of Antosca’s masterplan. The creator told reporters during a conference call that the tragic moment was built into the arc of the story from day one, and that the reverberations of her death connects to characters like Eddie and Lily in supernatural ways.

“It’s not a coincidence that Lily wakes up from her nightmare right after Jessica gets killed,” Antosca told reporters. “Mike and Jess’s plan was to burn Eddie’s body so his spirit would leave Lily — but Lily really wakes up after Jessica is killed, not after the body is burnt.”

The key to understanding ‘Candle Cove,’ it seems, is figuring out how Eddie, who was killed in 1988, fits into the present. “The question at this point is: Was Eddie being manipulated? Was Eddie back in 1988 under the influence of something else like Mike says at a certain point?” Antosca said. “He says ‘Candle Cove’ got into him and it changed him. Is that really what happened?”

We’re wondering the same thing. It’s that kind of ambiguous background spookiness that Antosca and Macneill want to give to viewers in a crazy but specific sendoff. He promised viewers won’t be left scratching our heads about what it all means when Episode 6 ends. We’ll also get some tragic closure for the characters.

“When we go into the finale, you’ll have a much clearer idea of what is behind the evil that is affecting Iron Hill, and we’ll understand what Mike is confronting,” he said, adding a minor caveat: “You’ll have the pieces to understand what happened, but it’s much more about the emotional and psychological experience for the characters and of the audience watching the show.”

As ‘Candle Cove’ wraps up, fans will also be wondering what will happen in the new story set up for Season 2, entitled ‘The No-End House.’ Antosca said the opportunity to break up the show into separate but complete six-episode stories gives he and his collaborators room to intentionally explore different themes and genres.

“‘Candle Cove’ is an almost pastoral style,” Antosca said. “‘The No-End House’ is an almost suburban story in the sense of John Carpenter movies or It Follows. It’s about a younger group of people and the visual style is more kinetic.”

It seems Antosca has many more stories to tell, and we can’t wait to see what happens next.

More like this
Culture
6.17.2022 11:31 AM
45 years ago, the worst Exorcist sequel almost killed the franchise forever
By Jon O'Brien
Culture
6.26.2022 12:30 PM
40 years, The Thing set a new standard for sci-fi thrillers — and accidentally inspired a modern movement
By Andy Crump
Entertainment
6.27.2022 11:30 AM
You need to watch the scariest movie of the 20th century before it leaves Netflix this week
By Eric Francisco
Related Tags
Share: