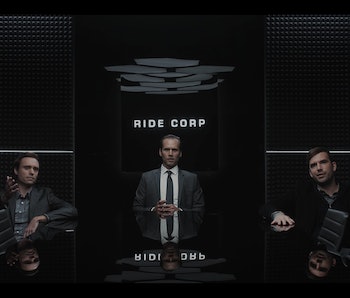 Lyft sees itself as the David to Uber’s Goliath: In a new series of ads released Tuesday, accompanied by the catchphrase “Ride on the Bright Side,” Lyft portrays itself as the humane competitor to Uber’s soulless, corporate mentality.

“Ride on the Bright Side” shows how Lyft continues to prioritize happy drivers, short ETAs, and safety,” the press release says. “The four spots feature a puzzled trio of executives who just can’t understand Lyft’s commitment to putting people first.”

A puzzled trio of executives makes the reference seem opaque. It’s not. These executives represent Uber, allegedly Lyft’s evil, money-hungry, cost-cutting rival, with a strong preference for the color black. And, unlike Lyft — according to the four ads — Uber does not care about timeliness, safety, good ratings, or driver compensation.

It’s not a very creative idea: Everyone’s seen this type of ad before, in which Corporation A’s mindless money-grubbers study Corporation B’s superior tactics, then attempt (and fail) to dream up a competitive solution. Still, Lyft’s execution isn’t bad, and the ads might just make you chuckle.

Here’s one about timeliness:

And another, about tips:

(Find the two other ads, one on safety and one on five-star ratings, here and here.)

The advertisements coincide with a Lyft announcement for the device, Amp. The company elected to replace its “iconic Glowstache” — those pink mustaches you see in Lyft-affiliated cars — with a smart device, sans any hint of facial hair. Amp is “the first in-car communications device of its kind,” designed to make it “even easier for passengers and drivers to find each other,” and to add an “extra layer of safety.” It’ll roll out nationwide at the turn of the new year.

Those who think Lyft may not be as upstanding as it could be, despite the company’s best efforts, may wish to explore Arcade City.

More like this
Gear
Oct. 5, 2022
How Elon Musk plans to use Twitter for creating an 'everything app'
By Jackson Chen
Culture
Oct. 4, 2022
You need to watch Spielberg’s most divisive sci-fi movie on Amazon Prime ASAP
By Robin Bea
Culture
Oct. 3, 2022
Netflix has the perfect sci-fi thriller to kick off your spooky season
By Jake Kleinman
Share: