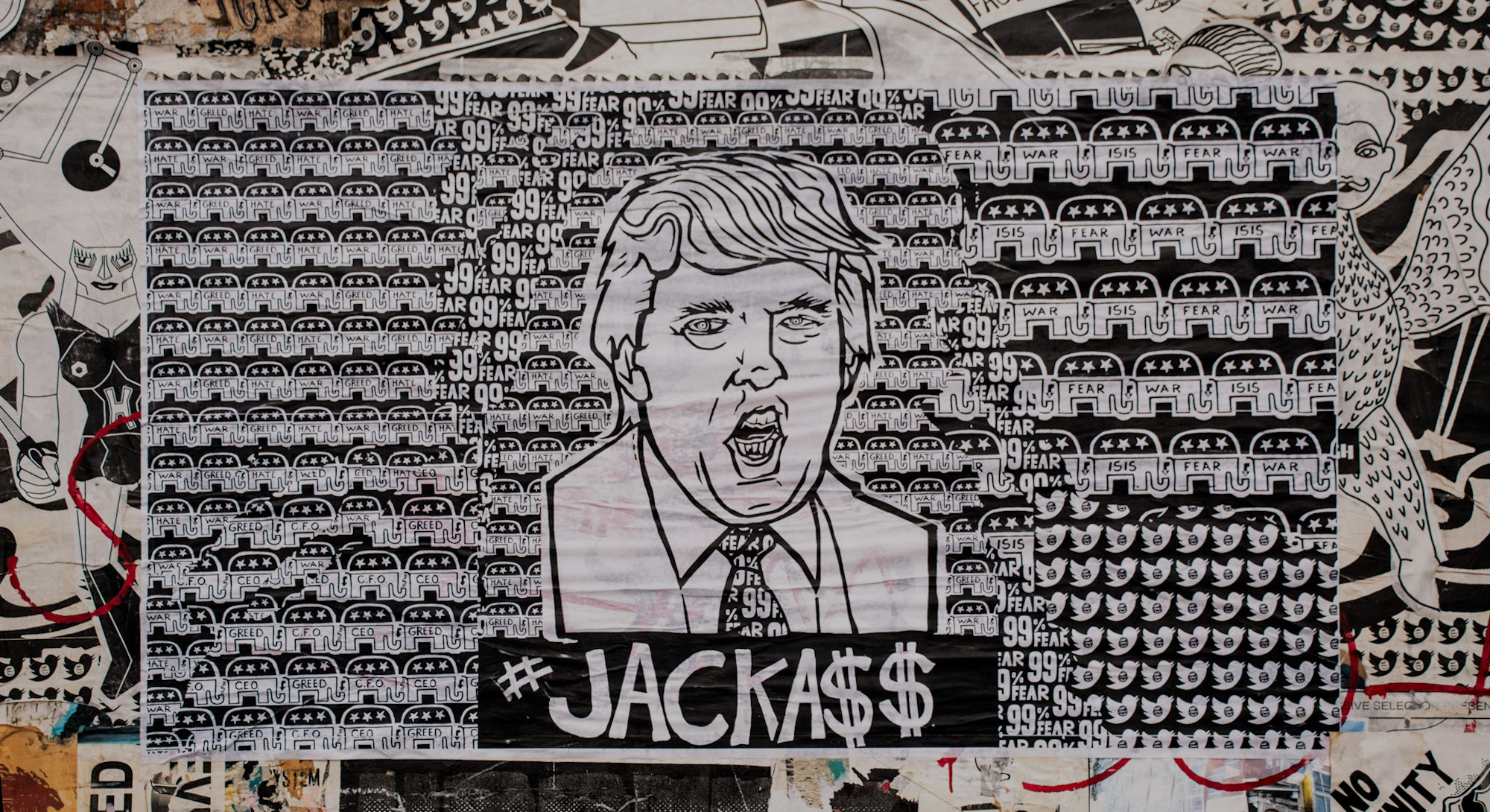 Cool it, Banksy, we’re good. While the rate and acidity of political art in the 2016 election was especially intense, the unlikely election of Donald Trump as the next American president will create a new urgency amongst protest artists; the irony of pieces like the shriveled-penis Trump statues has disappeared completely in one short week. There are plenty of American performers and artists working in film, comedy, comics and experimental work who will be answering the call for artistic resistance; here are some of the most important ones to track.

O’Malley’s been creating some of the most elaborate, bizarro comedy out there for years now, but his work during the election was particularly inspired, insightful, and gross. Beginning in March, the comedian who spent years writing for Late Night with Seth Meyers took on the persona of an uber-Trump supporter named Mark Seevers, who runs a fictional Breitbart-style news site called “Truth Hunters” and encourages attendees to express their hatred to the camera.

The results, which were aired on Funny or Die, were alternatively funny and sad, hitting rallies in Orlando, Atlantic City, Phoenix, and the RNC (his conversation with hate-slinging Breitbart News writer and Twitter pariah Milo Yiannopoulos is something else). On his popular Vine account, the comedian has been satirizing class issues in six-second segments for years, often taking on the persona of a poor person who worships the garish rich, hyper-masculinity and authority figures from policemen to McDonald’s signs by screaming praise at them. Instead of overtly criticizing, O’Malley appeals to the ego and brings out the true colors of the people he talks to.

“Money’s a game, and you the winner ‘cause you got the most points, right?” he tells a man in a nice car on the streets of New York. When the man gives a thumbs up, O’Malley yells, “Please, I need help!”

It’s unclear whether the Mark Seevers character will continue to be a consistent bit for him in the coming years, but the spirit of the act will continue, regardless.

Maybe it sounds hyperbolic to declare Marcia Belsky the supreme overlord of feminism, but we live in hyperbolic times. A comedian based in New York, Belsky has produced activist work that has grown more focused and pointed than ever over the past year. She launched the “Headless Women of Hollywood” website to media applause and continued to grow her standup career. Her act focuses on how women will soon rule the world, twisting social media memes into satirical feminist statements like “Crush Men Monday” and “#killallmen.”

“I grew up as a liberal Jew in Oklahoma, so I think to a certain extent politics and comedy have always overlapped for me,” she told Inverse. “I’m what some might call a ‘militant feminist,’ because I train a militia of women in the woods. I like to make jokes as an ‘angry feminist’ so that women can laugh while also being like ‘uh fuck yeah … we should be angry.’”

Belsky is also the lead singer of the NY-based band Free the Mind, which creates music that fits in snugly with her perspective; popular songs include the beloved hit “All Older White Men Should Die (But Not My Dad)” and “Women Are Perfect”.

“Hillary losing felt so defeating to me but also gave me resolve and determination to be funnier and more political than ever,” she said. “I think comedy plays a huge role in opening up people’s minds to other perspectives and how they view truth as a concept. As women, we are about to get four years of men trying to define truth for us.”

For an artist that knows how to harness the internet to their advantage, look no further than the brilliant commentary of Amalia Ulman. Early this year, Ulman revealed a long-running performance art piece called “Excellences & Perfections,” conducted exclusively over Instagram selfies and captions. It comments on timely, zeitgeist topics such as the image we project online, the nature of femininity, and youthful ignorance.

Before you dismiss it as millennial navel-gazing, the work deserves a close examination. The story follows Ulman over the course of a year; she stages a “sudden move” to Los Angeles, falls into the role of “sugar baby” while she struggles in a new city, then eventually tumbles into drugs and depression before moving back home. For the duration of the project, Ulman allowed her followers to believe this was happening to her in real time, and it marked the sort of successful social media reality project that resembled, in some ways, 2013’s @horse_ebooks project.

“The idea was to experiment with fiction online using the language of the internet,” she told The Telegraph in January, “rather than trying to adapt old media to the internet, as has been done with mini-series on YouTube. The cadence and rhythm were totally different.”

In an age where social media is the ultimate purveyor of smoke and mirrors, Ulman has a solid grasp on how to use it for forward thinking.

It’s early days yet in the political art career of Simone Shepherd, an actress and one of the most popular artists on the fading Vine platform. But the platform is less important than the message, as she proved when she added a sober rejoinder to the viral “mannequin project” that swept the internet in the weeks leading up to the election.

“I felt that it was important to make sure that people didn’t forget those moments using this very viral movement thats happening with the mannequin challenge,” she told Time Magazine.

Shepherd’s contribution was a minute-long piece around Black Lives Matter, chronicling the baseline messages and issues that black people are facing, advocating, and rallying against with allies in the face of police brutality and discrimination. Included in the piece were references to a number of high-profile cases including Trayvon Martin, Philandro Castile, Sandra Bland, and Alton Sterling. While a follow-up to the project hasnt been announced, it’s clear that Shepherd has a message and the creative chops to turn heads while expressing it.

While the Tim and Eric sense of humor infused the Bush and Obama eras with absurdism, and even extended to an ironic endorsement of Donald Trump in 2015, Heidecker has spent the majority of this past year making adjustments to his perspective. He’s continued to stick to the absurdism for which he is known, in videos like “Tim Heidecker’s ‘How Trump Named His Children’” and the Adult Swim favorite On Cinema, there have been a number of new wrinkles in his recent work that points to a new chapter. Look no further than his excellent In Glendale album, which was written and performed without a trace of the expected irony.

After Trump’s election, Heidecker released “depression rock” single “Trump Tower,” in which he declared “You can bury me up to my ears in quick dry cement / I’ll never call that motherfucker president.” While he may be the king of absurdist comedy, it’ll be interesting to see where Heidecker leads his loyal fanbase as he continues to find new directions to take his art.

The world of comics has been diversifying in leaps and bounds in the last handful of years, and it’s brought many much-needed voices to the forefront of the medium. One we look forward to hearing more from is Taneka Stotts, a Portland-based artist whose work explores the inner struggles of black characters and queerness in sci-fi narratives.

Her best-known works include contributions to the Beyond comics anthology, which blends sci-fi and queer themes, and her collaboration with fellow artist Sara DuVall, the brilliant Deja Brew. Stotts has stated that she’s inspired by the “black girls are magic” movement to build the themes her work hinges around.

Just kidding. But, um, hes trying? Keep at it, pal.