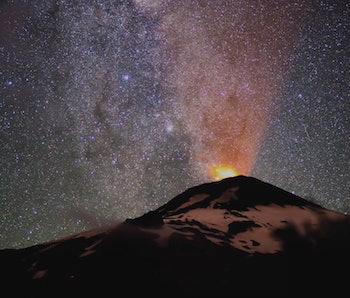 Project Blue wants to launch a telescope into space by 2019 to look for habitable worlds residing in Alpha Centuari — the closest star system to Earth at a distance of just 4.37 light-years away. The collaborative project is now addressing the mystery of how exactly it plans to fund this sort of private mission: A Kickstarter campaign launched Tuesday with a fundraising goal for $1 million by December 21.

In terms of privately funded projects investigating Alpha Centauri for (we hope) aliens, Breakthrough Starshot has been dominating the narrative. But while that initiative wants to send low-cost nanocraft on 20-year journeys to directly snap rudimentary images of any planets in the system, Project Blue is focused on higher quality observation from a distance. The telescope itself would be about the size of a small washing machine, featuring a mirror less than two feet in diameter.

Since its debut last month, the project has emphasized the rich possibilities that could await us once we better image the Alpha Centauri system. The system itself is being so aggressively studied because of a) its close proximity to Earth and b) the high likelihood — like, really high, as much as 85 percent — that it’s home to at least one habitable, Earth-like planet.

Proxima Centauri (of recent Proxima b fame) is, as the name suggests, the one closest star to Earth at 4.25 light-years away. But the binary star system of Alpha Centauri could host larger planets — more similar in size to Earth — and has a potentially bigger Goldilocks Zone (the region around a star where planets a conditions are most optimal for liquid surface water to exist).

Breakthrough Starshot already has the benefit of big-name backers (like Stephen Hawking) and a $100 million budget, so Kickstarter seems like a pretty solid direction for Project Blue to go in. People love throwing their money at anything that offers even the most remote possibility of finding aliens, and this is more legit than a lot of other crowdsourced projects out there. NASA and other government entities tend to focus on broader projects, so something like Project Blue is kind of a more natural fit for Kickstarter anyway, since it can use more specifics and give donors something more concrete to feel excited about.

More like this
Science
6.22.2022 10:15 AM
Ice could bring an unexpected key ingredient for life in alien oceans
By Kiona Smith
Science
6.30.2022 10:00 AM
Behold! Curiosity discovers Martian rocks contain an essential ingredient of life
By Allison Parshall
Science
6.28.2022 7:00 PM
Cosmic rays could erase evidence of past life on Mars
By Kiona Smith
Related Tags
Share: