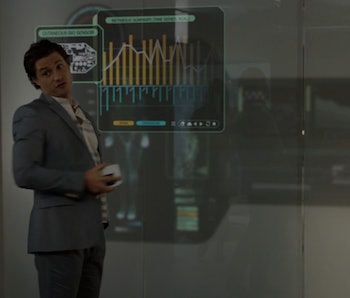 Of the handful of patients that show up in Bunker Hill hospital’s gleaming atrium in the third episode of Pure Genius, a woman named Melissa stands out as Dr. James Bell’s next guinea pig. The biotech lord sees her as the perfect candidate for his new, ultra-intensive weight loss app, a sort of souped-up FitBit for the severely metabolically challenged. Like today’s smart wearables, it has its limits: They’re only as effective as the user is disciplined.

Upon entry into the hospital, Melissa is told she is pre-diabetic and has hypertension, high cholesterol, and a high risk of heart failure. “That is the nicest way anyone has ever told me that I’m super fat,” she quips cheerfully. The Bunker Hill team sticks a small plastic tab on her arm, explaining that it’s tracking all of her vital signs in real time. Suddenly, the glass screen surrounding her room is awash in numbers.

The “FitBit of the future,” as Bell calls it, shows Melissa’s exact caloric intake and expenditure; her real-time blood glucose, ketones and triglycerides; and her rate of ingestion of fats, proteins and carbohydrates. This is a big step up from the capabilities of today’s smartest wearables, which are still limited to collecting data on external metrics — like heartbeat, temperature, and blood pressure — because they’re reliant on skin sensors. There’s no way Bell’s sensor is tracking those numbers using data from the surface of Melissa’s skin; to measure the products of her metabolism, the sensor must be continually drawing blood.

A few smart wearable developers have tried to skirt the need for a blood-dependent probe by being creative in their approach to measurement. A necklace called the Autodietary, developed by researchers at the University of Buffalo and Northeastern University in China, is a device that tracks caloric intake on the basis of the sounds food make as they’re chewed. In a release published in March, they explained that each food “has its own voice” and that their device can accurately distinguish between said voices 85 percent of the time, making it possible to track the amount and types of food a person is eating. The smart necklace can offer help to people with diabetes, obesity, and bowel disorders by “enabling them to better monitor their food intake and, thus, improve how they manage their conditions.”

Similar real-world apps and devices for weight loss include the JawBone UP3 wearable and MyFitnessPal phone app, which allow the user to log details about their daily food intake in addition to estimating calorie burn based on the intensity and duration of their movements. Still, measuring details about nutritional intake isn’t exact and, more importantly, is totally dependent on the person’s willingness to faithfully log the details of their diet. It’s understandable that a person might “forget” to input the spoils of their midnight Chipotle run, for example, but it will only work against them in the long run.

At the end of the episode, Melissa’s illness turns out to be much more than just a dietary issue, and the usefulness of the data from Bell’s sensor proves to be quite limited. That’s not to say it isn’t useful — that data allowed her doctors to pinpoint what exactly was going wrong in her body — but it required a certain level of expertise to parse and an even high degree of patient compliance to be useful. That’s the problem with so many of today’s wearables, even with their simplified metrics: If people don’t know how to use the data they’re getting from their apps, what’s the point of collecting it? In the end, even Dr. Bell’s infinite pool of biotech funding can’t buy human discipline.

More like this
Science
Jan. 21, 2023
A deadly fungal plague swept the world of The Last of Us — is it realistic?
By Tara Yarlagadda
Entertainment
Feb. 4, 2023
The Last of Us Episode 4 trailer teases the entrance of Melanie Lynskey’s character
By Claire Fox
Entertainment
Feb. 3, 2023
Mandalorian Season 3 Trailer May Reveal an Ancient Alien Species
By Dais Johnston
LEARN SOMETHING NEW EVERY DAY.
Related Tags
Share: