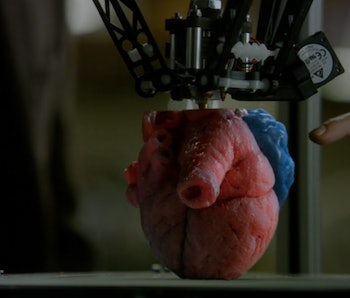 If the new CBS procedural Pure Genius is any indication, the future of medicine will leave a lot of room for mistakes. In the series pilot, a Zuckerberg-esque healthcare visionary named James Bell (Augustus Prew) calms an anxious cardiac surgeon by giving him an infinite supply of 3D-printed hearts to practice on. In Bell’s tech-centric Bunker Hill hospital — which very reasonably predicts the gadget-filled future of healthcare — cancer is no match for the seemingly infinite potential of tech.

While Bell’s impossibly optimistic attitude leads to disagreement about the limitations of medicine, his belief in the power of 3D printing is not misguided. His use of the technology to print an exact copy of his patient’s cancer-ensconced heart for surgeon Walter Wallace (Dermot Mulroney) to work on is not just genius — it’s already happening IRL.

Companies like the United Kingdom’s FormLabs and Colorado’s 3D Systems specialize in 3D-printing anatomically accurate models for physicians to study and practice with, much as the show predicts. The instructions for printing are based on patients’ CT and MRI scans, some of which the U.S. National Institutes of Health are collecting in the 3D Print Exchange, a growing library of open-access 3D-printing files for physicians to use in teaching, discussions with patients, and research. Most models used for these purposes are made from resin, but 3D printing really changes medicine when its “ink” is made of living cells.

It’s surprising that a show so optimistic about the potential of tech in healthcare didn’t consider the most obvious application of 3D printing — that is, printing whole organs. Already, scientists have succeeded in 3D printing viable ears, a tiny heart, and even, uh, a small breast. Smaller body parts, like pieces of bone, are being custom-printed to patch up organs inside the body. To be fair, real-life scientists haven’t been able to transplant anything nearly as elaborate as a full-scale 3D-printed heart into a patient, which is what the unfortunate patient in Pure Genius would have needed, but in a show where brain-to-brain communication is made possible by technology, it wouldn’t have been much of a stretch.

Perhaps it would have been too easy a fix. Much of the tension in Pure Genius stems from disagreements about what technology in medicine can accomplish, with Bell — who is not a physician — pit against his dourly pragmatic medical staff (another term for reality police is “good doctor” one of the physicians retorts). But despite how the 3D-printed heart is — or could have been — used in the show, its application to healthcare underscores one key caveat about the use of tech in medicine: No matter how advanced the technology is, you’re always going to need a human doctor.

More like this
Science
5.14.2022 12:30 PM
Omicron subvariants: An epidemiologist answers 5 essential questions
By Louis Jacobson and Kaiser Health News
Science
5.16.2022 10:00 AM
Pig-human heart transplants still have a long way to go
By Andrew Fenton, The Conversation and Françoise Baylis
Mind and Body
5.17.2022 8:41 PM
Mysterious hepatitis outbreaks in children are confounding doctors — here's why the cause is still unclear
By Katie MacBride
Related Tags
Share: