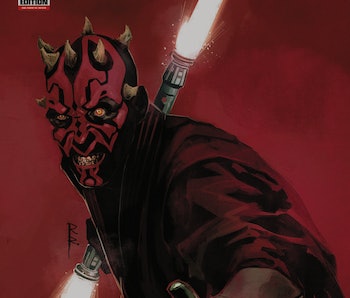 Before Darth Maul was exacting revenge against the Jedi, he was but a lowly Sith-in-training under Darth Sidious. The upcoming Star Wars: Darth Maul comic miniseries from Marvel is going to explore the heady days of his training and origin of the anger, that same anger he unleashed on Obi-Wan Kenobi.

Star Wars: Darth Maul will feature a younger Maul who’s training under Galactic Emperor-to-be Darth Sidious. Maul doesn’t take kindly to authority and when he’s instructed not to engage with the Jedi, he finds alternate avenues for his rage, along with an opportunity to bolster the forces of the dark side.

The series will, in part, be Maul’s origin story: finding out what drives him, how his training and his early experiences with the dark side shaped him, and who might have influenced and shaped a young Maul’s path. We know that Maul goes on to be a pretty unstoppable survival machine (um, literally), but thus far Darth Maul’s formative years as a Sith-in-training haven’t been explored by the canon.

Every villain has an origin story, though, and writer Cullen Bunn told USA Today that Star Wars: Darth Maul is going to uncover the roots of Maul’s evil.

“I like seeing where that impatience and anger comes from,” said Bunn, referring specifically to the fight scene between Darth Maul, Obi-Wan Kenobi, and Qui-Gon Jinn in The Phantom Menace.

It’s not a simple, straight-line path to evil, though. Bunn also said that “a big part of the story is Darth Maul’s descent to the dark side and almost being tempted away from it.”

Who knows, maybe we’ll also get the name of Maul’s tattoo guy — or at least a panel or two of him tearing up while getting his ribs done.