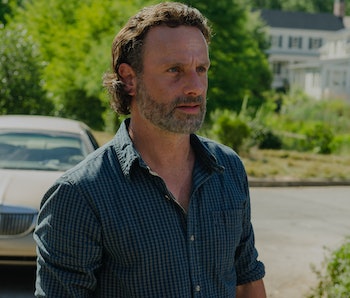 After a few seasons of opposing theories regarding the father of baby Judith in The Walking Dead, Rick (Andrew Lincoln) gave a definitive answer to Michonne (Danai Gurira) in this week’s episode, “Service.”

The following contains spoilers for the newest episode of The Walking Dead.

After an early visit to Alexandria Safe-Zone by Jeffrey Dean Morgan’s maniacal Negan, a demoralized Rick admits to Michonne why he allows Negan to intimidate and take advantage of the town. Rick wants to live to take care of Judith and raise her long enough that she’ll be able to survive on her own.

There doesn’t have to be a zombie apocalypse for any parent to relate to that notion, but it’s far more meaningful to Rick, because Judith isn’t actually his daughter. Judith actually belongs to Shane (Jon Bernthal), Rick’s best friend and one of the original survivors from Season 1.

In the very beginning of The Walking Dead, Rick was in the hospital while Shane and Lori became intimate to take care of Carl, Rick’s son. Later, Lori became pregnant and gave birth to Judith on her deathbed. Given the timeline, fans were curious who Judith’s father really was.

While there’s no way to test DNA, it seems Rick just knows he isn’t Judith’s father, making his word as definitive as The Walking Dead can get. With Shane and Lori gone, Rick is trying to love and raise Judith as his own, in some way to honor the memory of his wife and friend, and in other ways to give purpose to his own. (It’s worth remembering Rick killed Shane in Season 2, but Shane had become belligerent and was a ticking time bomb to the group.)

Rick’s confirmation in “Service” finally puts to rest several years of debates among fans who didn’t conclusively know Judith’s parentage. It was always ambiguous, as The Walking Dead often is with questions like these, but Rick’s answer is the closest to concrete, even if fans might never really know.