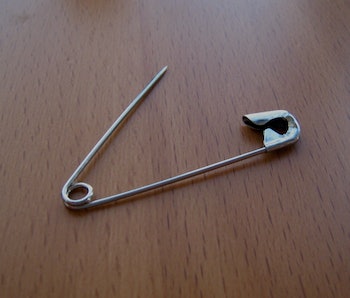 There are countless forces responsible for Donald Trump’s win in Tuesday’s presidential election, but a frightening part his success was a wave of white nationalism and racist support. Now that he’s the president-elect, some of his worst supporters are feeling emboldened, and there have been several reports of vandalism and bigoted acts towards minorities in the past few days. However, there’s still a lot of good in the world. Numerous people have taken to wearing safety pins as a show of solidarity with people who have been victimized by Trump’s America.

Attaching a simple, ordinary safety pin to your clothes someplace that’s easily visible identifies the wearer as an ally. In big crowd, the pin is a way for somebody who is feeling persecuted to spot a buddy — or just for two like-minded people to recognize each other.

The tradition originated earlier this year in the wake of the Brexit, which was similarly fueled by nationalism with unfortunate racist undertones. The Muslim council of Britain documented numerous instances of hate crimes in the wake of the decison, and then-Prime Minister David Cameron had to openly condemn these increasingly common bigoted attacks. In June, an American woman living in Britain who preferred to stay anonymous came up with the concept of wearing pins.

The idea, which itself was inspired by the #illridewithyou movement in Sydney after a wave of Islamophobia in 2014, caught on in Britain. Now that the U.S. has had its own version of Brexit, safety pins have crossed the pond as well.

More like this
Culture
21 hours ago
Lost Never Solved Its Weirdest Sci-Fi Mystery, But This Episode Came Close
By Jake Kleinman
Culture
Feb. 4, 2023
The End of the Cold War Could Have Killed James Bond. Instead, it Made Him Stronger.
By David Grossman
Culture
Jan. 29, 2023
Lazy people swear by these 50 extremely helpful, low-effort products
By Cristina Sanza
LEARN SOMETHING NEW EVERY DAY.
Share: