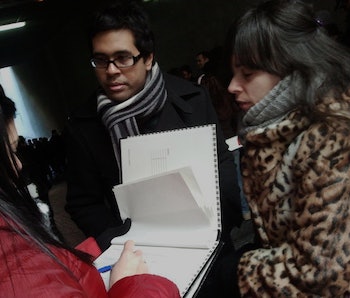 It’s a time-honored tradition: On Election Day, nobody knows how each candidate is polling — not until after 9 p.m. EST, when the East Coast results start streaming in. There are exit polls, sure, but the anecdotal and the statistical rarely meet. But, this year, Votecastr, a startup helmed by ex- Republican and Democratic strategists, is aiming to change that by live-streaming data for specially selected volunteers — paid and unpaid alike — from seven key swing states. The idea is to create a barometer for democracy.

“We’ve been lucky that this year has been so controversial,” says Chris Lapetina who handles communications for the startup, which is far more radical in approach than it appears on first glance. He says that paying volunteers to report their numbers, a Nielsen-meets-Mechanical Turk hack, presents a key advantages that old-school exit polling can’t boast: live results. He’s excited to see those results on Slate and Vice.

Critics, however, argue that telling voters what’s going on throughout the day will have a dampening effect, swinging the election Brexit-style towards the slightly less popular option. And that effect could be particularly strong in America, where time zones mean late-voting West Coasters would be operating with a potentially damaging amount of information.

Votecastr pushes back on that reasoning with this line of reasoning: That’s all crap. Lapetina says the social science behind keeping numbers at bay before polls close is outdated, undemocratic, and ridiculous, especially after daylight saving time. “Why wait until 9 p.m.?” Lapetina asks, saying it’s an anachronistic nod to when we still swore by radio and television for our news. “We’re giving people a better understanding of how voting works so they have more confidence in the process. We have one candidate [Republican Donald Trump] who says the whole thing is rigged through the media. But we’re making this as transparent as possible, actually.”

The self-inflicted media ban on reporting statistics while polls are still open has been a tradition since the advent of the television and radio. But, in 1980, Jimmy Carter conceded the election before West Coast polls closed, with many pundits arguing that Carter handed the election to his successor, Ronald Reagan. And, in 1982, the casual media ban became a stern one when Los Angeles Mayor Tom Bradley — a black man — lost the 1982 race for governor of California despite exit polls indicating otherwise. Political scientists argued that voters who were surveyed were too ashamed to admit that they were going to vote for Bradley’s white opponent. The media ban came to be known as the Bradley Effect.

Bradley Effect aside, exit polls are strongly affected by self-selection bias: Voters that choose to report their votes are likely to have a lot in common. So are the people that vote in advance or absentee. So are the people who vote late. Votecastr gets around all of this by taking the self part out of the selection process, but its method is still far from flawless; it hinges on social desirability bias, the idea that people lie about who they vote for to fit in with their conscience and friends. This is a huge tactical problem in 2016 because many conservatives may cast hold-your-nose votes for Hillary Clinton. And, while Lapetina emphasizes this is a forecast, it’s hard for voters to pull meaning from real-time data in real time.

As for that argument that people might be dissuaded from going out? Social science research cocks a huge eyebrow to that theory. A 2008 Yale University-led political science review argued that in fact, releasing real-time data on voting trends encouraged voters to vote. The numbers made non-voters feel guilty for being social shmucks. They were guilted into voting so they wouldn’t feel left out.

So while Votecastr’s method might seem to include too small a sample of voters that’s over reliant on honesty, it might be a way to get around the classic problem of how to gauge real-time voter sentiment — while also skipping over the tired journalism gag. Lapetina sincerely thinks that Votecastr is going to alter the course of Election Day reporting. “In elections 20 to 40 years from now, there will be a lot of projects like this, and they will be better,” he confidently predicted. “This idea that we have to sit around and watch network TV to make predictions … That doesn’t make sense.”

More like this
Science
Jan. 28, 2023
How does the placebo effect take hold? A doctor explains two influential factors
By Kathryn T. Hall. and The Reader
Mind and Body
Jan. 21, 2023
Procrastination study suggests a link to shoulder pain, bad sleep, and more
By Eva Skillgate, Alexander Rozental, Fred Johansson and The Conversation
Gaming
Jan. 15, 2023
Do video games make you smarter? One surprising genre leads the rest
By Richard E. Mayer and Knowable Magazine
LEARN SOMETHING NEW EVERY DAY.
Related Tags
Share: