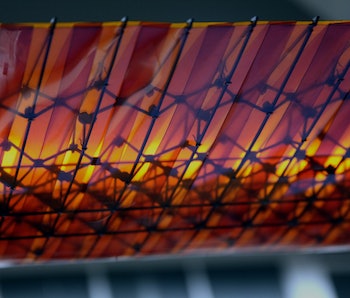 While electric jets and flying Ubers are just around the corner, there’s one aspect of air travel technology that hasn’t changed in almost a century: airplane wings. Clunky and fuel-consuming, the airplane wing engineering problem that has plagued NASA for decades. But that might change soon.

A coalition of NASA researchers along with those from MIT and University of California Santa Cruz say they might have a solution: It’s called a “morphing wing.”

“We make the whole wing the mechanism. It’s not something we put into the wing,” says Neil Gershenfeld, director of MIT’s Center for Bits and Atoms.

“This approach allows a single robotic structure to express both ‘hard’ and ‘soft’ continuum behavior based on the tunable lattice geometry,” researchers write in the journal Soft Robotics.

Because the small units can each move as their own structure, the wing can bend and twist at hundreds of individual points. Motors on the wingtips of the plane will apply the necessary pressure to bend the wings. The final surface of the wing, which will be covered with high- performing plastic “skin,” is entirely smooth for maximum aerodynamics.

Previous attempts at making wings more flexible usually involved mechanical control structures that added to the weight of the wing and made it less fuel efficient. The “morphing wing” will drastically reduce energy use, allowing planes to travel greater distances on less power, researchers say.

While the technology is still in development, one of its more immediate applications could be creating “super-efficient long-range drones” that could deliver medicine to remote areas, Gershenfeld says.

When Will It Be Implemented?

“We think that it’s plausible for aspects of the technology to be in use for smaller applications in 5-10 years,” NASA researcher Kenneth Cheung tells Inverse. “For passenger aircraft, it typically takes at least 30 years for a completely new system architecture, like this, to be integrated into the commercial passenger market.”

The LEGO-like pieces were arranged by hand, but the team has developed prototypes of miniature robots that could crawl along or inside the structure to easily build and repair the “morphing wings.” Eventually, the material could be used for the entire frame of the plane — and even applied to other structures, like bridges and robotic joints.

“The idea that you could continuously deform a wing shape to do pure lift and roll has been a holy grail in the field, for both efficiency and agility,” says Gershenfeld.

More like this
Innovation
5 hours ago
Mars City: 3 Red Planet resources could forge a critical building material
By CAROLYN COLLINS PETERSEN and Universe Today
Science
8.12.2022 10:00 AM
45 years ago, the first Space Shuttle made history without going to space
By Allie Hutchison
Innovation
8.9.2022 2:00 PM
A small robot on the ISS will practice performing surgery in space
By Doris Elín Urrutia
Related Tags
Share: