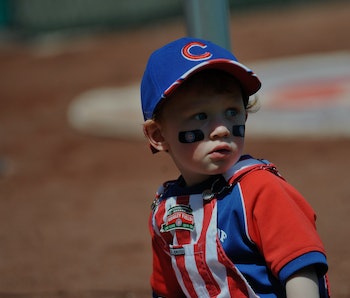 If you’re friends with a Chicago Cubs fan of baby-bearing age, keep August 2017 wide open. Now that the lovable losers are officially anything but, you can look forward to a deluge of babies borne from the alleviation of the collective anxiety of long-suffering, cursed Cubs fans.

That’s because research suggests that repressed anxiety and frustration can lead to a burst of sexytime when their source is finally eliminated. The repression of Cubs anxiety has been going on for well over a century — it hasn’t just been a long season (heck, that game was a doozy, complete with extra innings and a rain delay) but a long-ass time (108 years!) since the Cubbies brought home the Commissioner’s Trophy — and now that fans have finally experienced release, they might just give rise to a lot of little Cubs fans next summer.

There’s a lot of science to back the babymaking bonanza that’s going on in Chi-town right about now, but it’s a chicken-and-egg question: Does stress cause infertility, or does infertility cause stress? Some studies have shown that high levels of stress double the risk of infertility. Others, in contrast, have shown that infertility is what causes stress in some women.

The more pressing query regarding the fireworks that happened in many a Chicago Cubs fan bedroom in the wee hours of Thursday morning is whether a win really induces sex. It certainly seems to be the case for fans of another great American sporting tradition: Super Bowl babies, the NFL has (unscientifically) claimed, is a thing — the league has even cast an ad starring children conceived after their parents’ team won. Chicago’s potential cub boom, therefore, might also be chalked up to an evolutionary mechanism working deep within the male psyche. A 1998 study showed that when a man sees his team kill it on the field, his endocrine system goes into overdrive and produces a flood of testosterone, which in turn is believed to lead to one thing: Sex.

In other words, there’s something about winning that inherently brings along the sexy vibes. Maybe it’s the hormones. Maybe it’s just that the Cubs are the best-smelling team in the division. Maybe it’s just hot to finally win, making the lovable losers truly, ahem, lovable.

More like this
Science
Jan. 28, 2023
How does the placebo effect take hold? A doctor explains two influential factors
By Kathryn T. Hall. and The Reader
Gear
Feb. 2, 2023
How To Use TikTok’s AI Effects To Make Yourself Into a Manga Character
By Alyson Velati
Culture
Feb. 5, 2023
Zombies Used to do More Than Eat Brains, and Wes Craven Showed Us How Scary Their Masters Could Be
By Josh Bell
LEARN SOMETHING NEW EVERY DAY.
Related Tags
Share: