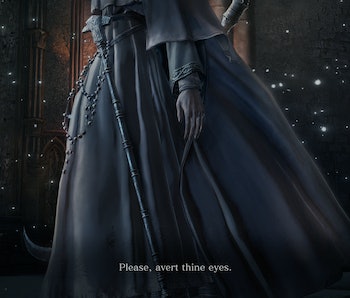 Every boss in Dark Souls 3 requires you to learn to conquer them and advance. They’re all dangerous, exhilarating, and overtly frustrating, but you begin to learn with every death, eventually pushing your way to the next stage of the game. This loop is what makes Dark Souls, well, Dark Souls. But one boss from the Ashes of Ariandel DLC for Dark Souls 3 brings that gameplay loop to a whole new level.

Known as the eldest of the three sisters who founded the Sable Church of Londor, Sister Friede retired to the Painted World of Ariandel to seek peace away from the conflicts of her past. She’s illusive, skilled, and powerful. Despite her excellent backstory and intriguing connections to the base narrative of Dark Souls 3, it’s her mechanics as a boss that make her so memorable.

When I first fought against Sister Friede in the secret room beneath the Ariandel Chapel, I was completely unaware her encounter consisted of three separate phases. Unlike previous bosses, each phase also requires you to empty a full health bar and learn a heavily modified moveset which becomes increasingly more powerful with every passing phase.

Her starting phase is relatively passive, but doesn’t provide you with much wiggle room to avoid her attacks. She uses a single scythe with large swings that take massive chunks of your health if they land, along with a cone of frost she can throw in front of her. The most difficult move allows her to turn invisible and impale you on her scythe from behind; taking away a third (if not more) of your health pool every time.

Once defeated, Father Ariandel joins the fight by burning down the sides of the room with flames, giving you more room to maneuver and revive Sister Friede for another go. Here, she uses all of the same moves present in the first phase with a much faster response time, while Father Ariandel stomps around with heavy attacks. While it takes a little while to get them down, it isn’t too difficult provided you bring along Slave Knight Gael to pull attention off you. Again, she falls, and again you feel a sense of triumph. For a moment.

After being killed a second time, Friede rises once more, empowered by the Blackflame and gaining access to a second scythe and a whole new series of attacks that can kill in a few hits. Her movement and attack speed drastically increase too, with all her regular arcing swings now able to hit you at almost double the distance. By this time, you’re probably going to be running low on Estus Flask uses too, which means you need to hit hard before she tears you apart.

Eventually, Blackflame Friede will fall and the encounter ends for good, but not without leaving a few scars on your character and your heart beating out of your chest. The entire boss encounter is loaded with stellar music direction, tense moments, and beautifully crafted visuals.

Sister Friede’s boss encounter is the perfect combination of Bloodborne’s fast-paced action and the grueling cinematic allure behind the epic encounters of Dark Souls. So, while it’s true that Ashes of Ariandel falls short in a few areas, From Software has still succeeded in bringing the best aspects of both franchises together.