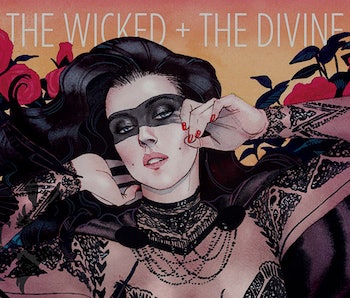 Image’s The Wicked + The Divine #23 might be one of the prettiest comic books ever published, mostly because the whole book is formatted to look like a fashion magazine. Keeping with the story’s glossy tone, the new issue is complete with ads for (fake) luxury goods, and full spread interviews with various celebrity gods. The creators even enlisted real culture journalists to conduct these interviews with their fictional characters.

The result? A gorgeously experimental comic that’s almost too cool to handle all at once.

Kieron Gillen and Jamie McKelvie have experimented before on The Wicked + The Divine. Previously, the two experimented with format and panels, creating set pieces that resemble music videos. Issue 23, however, does one further and changes up the entire format of the book. Kieron Gillen took on the role of editor-in-chief, hiring established journalists like Leigh Alexander, Dorian Lynskey, and Laurie Penny to interview the gods who populate his comic. In-character interview answers were provided by Gillen.

The text-heavy issue is also given life through Kevin Wada’s illustrations which act as photoshoots with the interview subjects.

As a comic series which treats immortal gods as rock stars and fashion icons, the fictional Pantheon Monthly that the comic issue styled itself as for #23 is a perfect medium to sell The Wicked + The Divine’s stylish, sexy, high society ethos.

Even the layout of text deserves attention for how it co-opts the magazine look for the unique issue. By combining the comic with a thematically similar medium, and recreating it as a physical book, W+D #23 borders on a piece of pop-art.

The Wicked + The Divine #23 is available now in comic book stores and digital retailers.