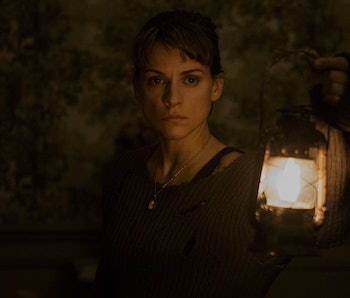 Beyond the Walls is great, and now American viewers can finally enjoy it. The three-episode miniseries, originally broadcast earlier this year on French TV under the title Au-delà des murs, has made its stateside debut thanks to streaming horror platform Shudder.

Veerle Baetens, (known best for her performance in the Oscar-nominated film The Broken Circle Breakdown), plays Lisa, a troubled speech therapist with a rich fake life; she intentionally avoids socializing with her coworkers by inventing a fake husband, while she really spends her time in a sparsely furnished apartment. Unfortunately, she can’t escape anxiety even in her cloistered existence. Each night, as she sleeps on her bare mattress, she dreams of wading knee-deep into a lake while something (or someone) ripples nearby under the serene body of water.

Then, one day she learns she’s mysteriously inherited the decaying house across the street from her building after an old man was found dead there, rotting for 30 years. He happened to bequeath the entire property to her in his will, but there’s one catch: Lisa has never heard of the old man let alone met him before. But, that doesn’t stop her from promptly moving her modest possessions across the road in hopes the change will offer a new spark to her vaguely defined past demons. Unfortunately for her, she’ll literally uncover new ones.

After hearing strange scratches behind the house’s cavernous walls, which are decorated with Rorschach-like wallpaper designs, she can’t help but investigate. While snooping around, she finds a door to a mysterious and windowless labyrinth of lush but decomposing Victorian rooms, with no exit. As soon as she encounters a limping and decrepit creature smeared with grime and sporting a pig head on his face, it becomes clear she’s in deep trouble. She’s uncertain of who is real and who is a ghostly manifestation of the house itself, which seems dead set on absorbing the life force of the droves of people who have become trapped just like Lisa.

Her increasingly dire predicament takes on an air of poetic dread, and the dream logic of each passing scene is as disorienting as it is sumptuous — think Guillermo del Toro and David Lynch teaming up to make a Sleep No More movie in French. Her hallucinatory experience passing without escape from dimly lit room to even more dimly lit room — an ornate parlor here, a marble adorned atrium there — is like a metaphor of her inner turmoil, which would be obvious if it wasn’t so engrossing.

She’s a fragile soul going through some sort of emotional distress in the outside world, and even if we don’t find out all the particulars of how that correlates inside, the show has its morbid mood down pat. We get information when she meets others, like Julien (François Deblock), who may or may not be a soldier from World War I who somehow found his way into the labyrinth, or Rose (Geraldine Chaplin), a woman dressed all in black who might hide the secret to getting out alive, as well as the way to Lisa’s dead sister. It’s an unsettling, character-based horror that you don’t really see anymore.

It’s such a fully developed world, even in just three episodes, that like Lisa’s ever-changing rooms, the show strikes a constantly evolving balance to be a great mainstream thriller for some, and an even better gothic horror story for others. Once you enter Beyond the Walls, you’ll never want to leave.