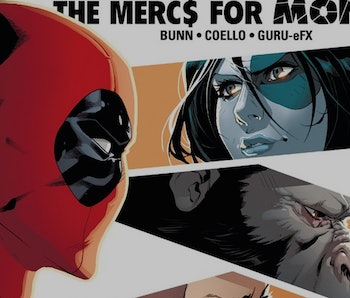 Marvel’s other, other Deadpool comic, Deadpool and the Mercs for Money, is currently playing out like a greatest hits collection, following popular Deadpool associates like Domino and Negasonic Teenage Warhead as they join our man on mercenary adventures. It’s just a shame Deadpool isn’t allowed to lead the group on their killing sprees; he really messed that one up at the start.

You’d think Deadpool would be rolling around in his friends’ respect by now. After the success of his film, the character has established himself as one of the hottest superheroes in comic books. Interestingly, Marvel’s writers continue to write Deadpool as the self-referential punchline with a heart of gold instead of a fearsome killer.

The current run of Deadpool and the Mercs for Money starts with Deadpool accidentally handing over Negasonic to an evil organization run by Doctor Doom’s daughter. Things only get worse from there, which pretty says everything you need to know about Deadpool. His storylines are just chaos from start to finish.

Luckily for him, a new team of Mercs agreed to join up with Wade, as long as Domino takes point as team leader.

Mercs for Money is one of the more interesting Deadpool books right now because it sidelines his fourth wall-breaking, post-modernism humor to tell a straight action story. In the process, Deadpool sheds some of his quirks and feels like more of a supporting character.

Not since Deadpool #20, which took a detour from the main storyline to tell a one-shot story about Deadpool taking a suicidal teenager out for a day of misadventures has the character felt this relatable. How this plays out in the future issues is still left to be seen given that Deadpool is still pretty obsessed with the idea of taking control of the “Mercs for Money.” But as we’ve seen previously, it probably won’t go his way.

Deadpool and the Mercs for Money is currently out in comic book stores and digital retailers.