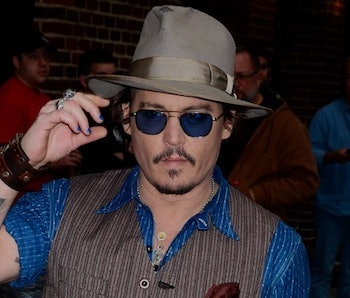 Johnny Depp has been cast in a mysterious role in the Fantastic Beasts and Where to Find Them franchise and the Daily Prophet rumor mill is speculating that he could be the famous pre-Voldemort Dark wizard Gellert Grindelwald. While having Depp in the films can’t be a bad thing, we wish he could have taken on the role of young Dumbledore.

For one, he’s the wrong age to be Grindelwald. He was supposedly born in 1882, which puts him in his early forties in prohibition-era New York. Depp is a decade older. The counter-argument would be that the Potter movies have never been the best with navigating ages, seeing as how they cast actors in their forties to play Lily and James. In the Resurrection Stone scene in Deathly Hallows, this defeated the purpose of the tragedy that when Harry sees their ghosts; parents and child are practically the same age.

For another, despite coincidentally starring alongside him in Sweeney Todd, Depp has a completely different bone structure than Jamie Campbell Bower, who played young Grindelwald in Deathly Hallows.

Campbell Bower is very distinctive looking, with the kind of long face and cat eyes that would be best suited to sharing a character with someone more along the lines of Colin Farrell (plot twist, Percival Graves is Grindelwald?) or Sean Bean, if someone in Depp’s age range is indeed what they wanted.

Hollywood magic can presumably fix this — or perhaps there will be a magical explanation for it; Polyjuice Potion — but the Potterverse is normally quite meticulous. Tom Felton and Jason Isaacs, who played Draco and Lucius Malfoy, indeed look like father and son, and Julie Walters was the spitting image of Molly Weasely.

So why would Dumbeldore make more sense?

Depp certainly has the batty energy of Dumbledore, as seen by Captain Jack Sparrow, his take on Willy Wonka, and Mordecai. But more importantly, there’s Depp’s reputation to consider and his recent fall from grace in the public eye. While this normally shouldn’t factor into an actor’s performance, Depp is too well-known for it not to. And if we’ve learned anything from Rita Skeeter, reputations are hard to shake off. Even the Pirates of the Caribbean franchise acknowledged this when it slyly and tellingly left him out of the fifth film’s trailer. Casting Depp in your movie is now the equivalent of casting Mel Gibson.

Book Dumbledore is sacred, but movie Dumbledore has always been something of a buffoon. This is best exemplified by the famous disparity in Goblet of Fire. Witness the difference between the book version, in which Dumbeldore calmly asks Harry if he put his name in the Goblet of Fire, and the movie version …

… in which he shrieks it while running and flapping his arms. It’s become a joke in the Potter fandom, and Johnny Depp in his current post-Mordecai incarnation would be the perfect self-aware Goblet of Fiyah?!?! Dumbledore casting choice.

Fantastic Beasts and Where To Find Them hits theaters November 18.