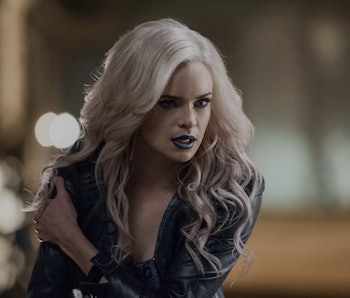 On The Flash, Caitlin (Danielle Panabaker) still can’t tell her friends about her terrifying powers, but she’s being forcibly changed on the molecular level and is losing time. While Barry and Cisco are busy stopping a filler episode sort of villain (bullied teen creating a hologram of a kaiju), Caitlin visits her mother, Dr. Tannhauser, at her lab and demands help with her burgeoning ice powers.

Dr. Tannhauser repeats tests Caitlin says she’s already completed, and we learn a couple things in the meantime: Caitlin’s mother abandoned her emotionally after her husband (Caitlin’s father) died, and if Caitlin keeps using her Killer Frost powers, she won’t be able to turn them off.

We’ve already seen that Caitlin has the most difficulty controlling her icy urges when she feels frustrated, and she seems to get angry more often nowadays, too. When her mother refuses to listen to her, she slams her hand onto the glass desk between them and covers it in ice. When Dr. Tannhauser’s assistant traps Caitlin in a lab, she nearly freezes his arm off, and in the episode’s final moments, Caitlin coats Cisco’s monitor with steaming ice when she realizes her problems are only escalating.

Panabaker says this season is important to her because it actually delves into Killer Frost’s origin story. “I think it gets to be more of an origins story, whereas in Earth-2, Caitlin Snow was just bad to the bone — nothing you could do about it. Here we get to learn a little bit more about how she got there,” she told IGN.

For too long, Caitlin’s flintiness has been explained by her husband’s death, but we’re now realizing her emotional walls were erected long before she met Ronnie. Her cold nature has a lot to do with her upbringing, and it’s that part of Caitlin that’s allowing her frost powers to grow unchecked.

The Flash airs Tuesday nights at 8 p.m. Eastern on the CW.