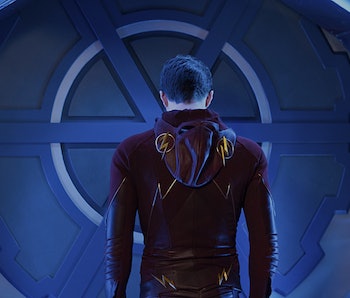 The Flash on the CW is one of the best television shows on right now, period. Even its “bad” episodes are buoyed by its fully realized characters and a cast whose chemistry together is electric.

Pop culture may very well be in the era of the superhero, but typical TV talk is often dominated by the prestige shows of the minute: Better Call Saul, Game of Thrones, and The Americans dominate water cooler chat. None of those shows, despite their virtues, are as joyous as The Flash.

With Season 3 shaping up to be a hell of a year with the oncoming Flashpoint-inspired storyline, it’s time to revisit some of the show’s must-see episodes, especially for unfamiliar viewers not used to seeing a guy run at the speed of light. One can argue these episodes listed aren’t as important as some I’ve omitted, but you can’t deny that this list features the Scarlet Speedster in his finest hour.

It’s dubious to begin a list celebrating The Flash with an episode that crosses over with Arrow, but “Flash vs. Arrow” arrived early in the show’s first season, while it was still developing an identity. In fact, Barry had stopped going by the “Streak” moniker only two episodes before.

But after the first season crossover, The Flash came out full-formed in its identity as a fantastical sci-fi that isn’t afraid to have fun. The differences between The Flash and Arrow came into sharp focus, which continued to define the show moving forward. And Diggle’s reaction to Barry’s super speed is still hilarious and precious.

As The Flash raced towards its first midseason finale, Barry’s first showdown with the Reverse-Flash allowed the lighter superhero to feel real, with higher stakes. Coupled with an emotional scene with his father — seriously, Grant Gustin and John Wesley Shipp are great onscreen together — and “The Man in the Yellow Suit” exemplifies just how dead-serious The Flash can be.

The episode where Dr. Wells reveals he’s Eobard Thawne is an onslaught of heartbreak and disaster. Cisco dies, Barry reveals he’s the Flash to Iris, and a tsunami destroys Central City — and Barry undoes it all by going back in time. It’s the first instance of The Flash establishing Barry’s ability to traverse time and space, a key element to the Flash mythos and to the possibilities in the story, with ramifications still felt even going into Season 3. But the end of “Out of Time” doesn’t feel cheap. It’s an earned ending that levels up The Flash into a different plane of superhero sci-fi.

So many good moments, if not whole episodes, occurred between “Out of Time” and “Rogue Air”: “Tricksters”, which not only added to the wrinkle of the Reverse-Flash but reintroduced Mark Hamill reprising his comical villain from the 1990 The Flash series; “All Star Team-Up” with Ray Palmer coming into his own as Atom; “Who Is Harrison Wells?” a revelatory detective mystery; and “Grodd Lives,” with the introduction of one Gorilla Grodd.

But “Rogue Air” is something else. While it awkwardly lines up with Arrow and its muddled mess, it’s still an exciting team-up that shows not only how huge the DC Arrowverse has grown but how self-contained it can be even in the era of cinematic universes.

Dr. Wells’s chilling substitution of the opening prologue just adds to the gravity of the show as it approached the end of Season 1, and that Barry had to call in Firestorm and the Green Arrow — in League of Assassins get-up, because Season 3 of Arrow was weird — didn’t feel cheap, but necessary.

This was the episode that made Kevin Smith cry (and hell, everyone else too). A finale that epitomizes the oft-overused “epic,” Barry travels back to the night his mother died, and while Barry could have changed everything, he refuses. As Barry earns his final goodbye, the Reverse-Flash rips open the sky forcing Barry, as the Flash, to be the true hero of Central City. But a few glimpses of the future show that The Flash is just getting started.

With the introduction of Jay Garrick — or so we think — The Flash doubles-down in its Flash mythos with Teddy Sears’s recurring role as a speedster from another Earth-2, greatly expanding the scope of the series.

There’s a criticism I don’t completely argue against that Season 2 of The Flash retreaded Season 1, with a rival speedster seeking Barry’s power yet again. But to that, I argue Zoom was more intense and world-threatening while the Reverse-Flash’s goals were more personal. Regardless, “Enter Zoom” — the first fight between The Flash and Zoom — emphasize just how much more dangerous Zoom is than Thawne. Barry’s paralysis is a legitimately heart-stopping development, if only it weren’t spoiled by the next episode.

This is cheating. I know. But the trifecta of episodes following “Legends of Today” weren’t just great, but typified precisely why The Flash is a fulfilling series. Patty Jenkins, Joe’s new partner introduced in Season 2, wasn’t entirely a good fit for Barry as a romantic interest, but she represented a type of happiness and peace Barry sought after. But a superhero’s life isn’t conducive to love, and in three episodes he learns why.

“Running to Stand Still,” the midseason finale, is a holiday nightmare with the return of the Trickster wrecking havoc and luring Patty, after one of his lackies who killed her father. Barry saves Patty not from a falling bridge, but from doing something she’d regret for the rest of her life.

Their relationship is quickly followed up with “Potential Energy,” which isn’t only a fun concept episode that slows down Barry (literally) but was an engaging drama with Barry unable to make room for Patty in his life. Barry’s happiness ends outright in “The Reverse-Flash Returns,” a strong episode that not only brings back Rick Cosnett as Thawne, but where Barry and Patty break-up.

In an episode that was primed to be just a goofy romp because the monster of the week is a GIANT MUTANT SHARK, “King Shark” destroys expectations as not just a great episode structured like a monster movie, but one that straps a rocket to the Zoom mystery. The internet dove into a spiral of madness and speculation after the shocking unmasking of Zoom.

Also, it has Diggle, easily the best supporting character from Arrow. More Diggle is always appreciated.

Who would have thought the Clerks guy would direct one of the best episodes of The Flash?

Kevin Smith took the helm of the late Season 2 episode and did so while bucking his own signature sensibilities. Barry didn’t start making weed and dick jokes out of the blue and the expected Jason Mewes cameo was restrained. Instead, “The Runaway Dinosaur” was a Dickensian meditation on Barry and his motivations as a superhero. It’s heavy-handed that the Speed Force would materialize as Barry’s friends and family, but it’s still an emotional tour through his conscience.

It wasn’t exactly the finale of Season 2, but the fact that it set up Barry’s shocking actions — going back in time to save his mother — paved the way for The Flash going in to Season 3. For Game of Thrones fans, winter has come. For us tuned into The Flash, Flashpoint is coming.