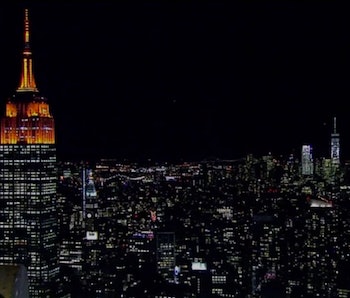 New York City’s iconic Empire State Building is a noted haunt for monsters, so it makes sense that it’s celebrating Halloween with a spooky light show.

Ever since 1976, the building has changed the colors of the lights around the top floors and spire to celebrate special occasions. The lighting system got a major update in 2012 that allows it to display a dazzling 16 million colors.

For Halloween, the 86-year-old building is pulling out all the stops. It’s illuminated in a pumpkin-like orange glow, although every 15 minutes or so there’s a stunning light show. The entire top of the skyscraper looks like something out of an electrifying experiment in Dr. Frankenstein’s lab. If you missed it, you can check out last year’s light show on YouTube, but keep watching and it’ll probably start up again.

Check out a live stream of the building and the view of lower Manhattan right here, via ABC News.

Last week, the Empire State Building lit up orange and blue to celebrate the New York Knicks’ 70th season and the day before that to celebrate the World Series between the Chicago Cubs and the Cleveland Indians.

Upcoming special lightings include a red, white, and blue glow for Veterans Day on November 11, green and red to kick off the Radio City Christmas Spectacular’s Opening Night on November 15, and blue to honor the 25th anniversary of the Blue Man Group on November 17.

You can see a full lighting calendar at the Empire State Building’s Website. So, the next time Twitter tries to dupe you into thinking it’s honoring Prince with a purple glow, you’ll know where to check.

More like this
Culture
10 hours ago
The End of the Cold War Could Have Killed James Bond. Instead, it Made Him Stronger.
By David Grossman
Science
Jan. 29, 2023
NASA-funded study to research if bacteria could help form building materials on Mars
By Matt Williams and Universe Today
Culture
12 hours ago
A Failed Sci-Fi Sequel Stunt Accidentally Set the Standard for the Forgettable Netflix Movie
By Hoai-Tran Bui
LEARN SOMETHING NEW EVERY DAY.
Share: