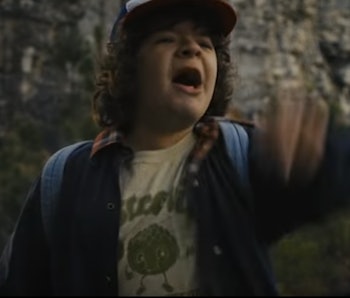 As a proper Halloween gift, some folks over at Comedy Central UK have given us a Harry Potter and Stranger Things mash-up video, and it’s actually incredible how well it works.

Both series have embodied #friendshipgoals for awhile now — Harry Potter since 1997 and Stranger Things for an admittedly shorter period since Summer 2016. But the central messages remain the same. They’re about good versus evil and, most poignantly, the power of friendship. So pure and so simple, so we really shouldn’t be surprised that Harry, Ron, and Hermione mesh with El, Lucas, Mike, and Dustin perfectly.

The Potter Things crossover video combines some of our favorite scenes and characters from Harry Potter and Stranger Things. The group gets along like magic (sorry).

In the video, Mike, Eleven, Lucas, and Dustin miraculously make their way across the pond to Hogwarts School of Witchcraft and Wizardry. They’re welcomed to Hogwarts by Headmaster Professor Dumbledore and soon team up with Harry, Ron, and Hermione.

At one point, Hermione takes Eleven’s place in defending the Stranger Things kids from bullies, using her magic in place of Eleven’s telekinetic abilities, but don’t worry, blood still drips from her nose.

There’s some other fun crossover weirdness. The Pensieve can apparently see into the Upside Down, but, really, all we see is an image of Eleven’s Eggos. And the combined gang seems to go up against a mysterious force. We’re not sure if it’s the Demogorgon, Voldemort, or a weird combination of the two, but everyone looks sufficiently freaked out and battered by the baddie nonetheless.

Undoubtedly, Ron and Dustin would get along brilliantly as the often-underappreciated, secret geniuses of their respective groups. Harry would take Eleven under his wing as the Chosen Ones duo. Hermione would adore Lucas and Mike; she might even remind Mike a little bit of his own sister, Nancy.

The video is obviously one big joke, but it’s fun. It’s magic. It’s the kind of thing that the internet was created for. Oh, and the combined soundtrack from both series isn’t too bad either.

Check out Potter Things below and be on the lookout for the secret message at the end!