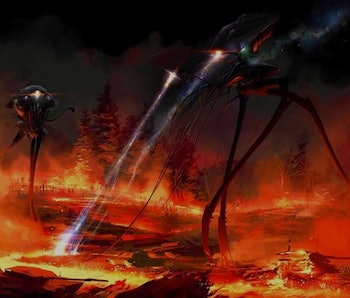 According to legend, countless Americans were fooled into believing a real Martian invasion of America was taking place on October 30, 1938. The perpetrator of this supposed “hoax” was The Mercury Theatre on Air’s broadcast of the radio dramatization of The War of the Worlds. Performed primarily by Orson Welles — and based on the 1897 H.G. Wells novel of the same name — the show was unprecedented in bringing fictional aliens into homes IRL. Thousands panicked, and police even showed up at the radio studio to shut it down. But this wasn’t a Halloween prank. Instead, the only reason why an outrage existed was thanks to ignorance of dramatic science fiction.

First of all, the War of the Worlds radio broadcast is awesome, and you can see (or listen) why, without the proper information, people might have gotten the wrong idea. It really does just sound like a bunch of real news reports about a growing and gruesome alien invasion. And while there was some legit panic, most of this historical controversy has to do with outrage rather than confusion.

Mercury Theatre on Air wasn’t trying to fool anyone: Several newspapers ran advertisements for the show, and there were disclaimers at the top of the show, and a few throughout. But, commercial breaks weren’t super-frequent with this particular show, because it had a “small audience,” meaning they had more freedom to have fun with the fictional conceit of presenting an alien invasion as “real” news bulletins. But, there were disclaimers. Today, this seems crazy, because if you walked in 20 minutes late to Independence Day, you wouldn’t think it was a documentary.

And yet, the medium of radio had been the primary supplier of information during WWII, which in 1938, the U.S. wasn’t a part of yet. This means, plenty of people feared an attack from the Axis powers at any time. Radio bulletins were to be trusted, meaning if you missed the beginning of the show, or weren’t familiar with the novels of H.G. Wells, you might have freaked out.

So, what actor Orson Welles and the cast of War of the Worlds were censured for had more to do with accusations of public decency than instilling the “real” belief anyone had in aliens. Instead, this controversy was about what the aliens could “represent” and how a piece of sly entertainment could cause panic. In a way, The War of the Worlds radio broadcast was a type of performance art that was criticized by the establishment. In this way, it almost goes without saying that it was way ahead of its time.

Make your Halloween Eve the best ever by listening to the original broadcast.

More like this
Entertainment
19 hours ago
Dune: Part 2's most important, untold story will be on HBO Max
By Ryan Britt
Entertainment
8.9.2022 1:00 PM
Has your favorite HBO Max show been canceled? The fate of 9 sci-fi series revealed
By Robin Bea
Entertainment
8.3.2022 4:17 PM
Prey is an old school throwback that brings new life to the Predator series
By Eric Francisco
Related Tags
Share: