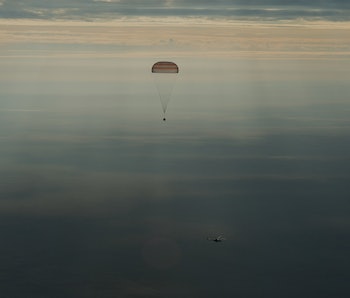 The crew’s return to Earth kicked off at 4:45 p.m. Eastern when the trio said good-bye to their three crew members, NASA’s Shane Kimbrough, and Russia’s Sergey Ryzhikov and Andrey Borisenko. As the hatch on the Soyuz closed, the 50th expedition in the space station’s 16 years of operation, kicked off.

The trio strapped into their ride home — a Russian Soyuz capsule — and undocked from the orbital outpost at 8:35 p.m. Eastern. The crew then spent two and a half hours on orbit, before re-entering the Earth’s atmosphere. At approximately 11:06 p.m. Eastern, the Soyuz began its descent by firing its engines.

As the capsule plummeted through the atmosphere, a series of parachutes deployed on time to help slow the vehicle. Just before touchdown, a set of six thrusters ignited, further slowing the Soyuz and allowing the vehicle to land upright and right on schedule.

Cosmonaut Anatoly Ivanishin was the first out of the capsule, followed by Takuya Onishi and finally Kate Rubins. The trio was all smiles as they were helped out of the craft and briefly checked out by medical staff. When asked how she felt following the trip, Rubins said she felt better than she expected and was ready to enjoy being back on Earth.

Each crew member then checked in with family and friends via a satellite phone. Once the medical checks are complete, the trio will participate in a traditional Kazakh welcome home ceremony. From there, Rubins and Onishi will hop on a jet plane bound for NASA’s Johnson Space Center, while Ivanishin will fly back to Star City Russia.

Rubins made history as she became the first scientist to sequence DNA in orbit. She also participated in two spacewalks to upgrade the station’s hardware and conducted a number of other biological experiments, including the cultivation of beating heart cells in space.

The remaining crew of Kimbrough, Ryzhikov and Borisenko will have the station to themselves for the next three weeks until NASA’s Peggy Whitson, France’s Thomas Pesquet and Russia’s Oleg Novitskiy lift off from the Baikonur Cosmodrome in Kazakhstan on November 17.