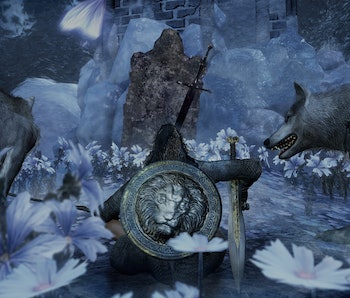 Whether you prefer slaying your enemies with katanas, greatswords, or magic, there’s no question about the wonderful arsenal of weapons and equipment that Dark Souls 3 provides. Weve been waiting for quite some time to see how From Software planned to expand upon it within downloadable content and with Ashes of Ariandel released, we received some astounding additions for our characters to use.

Here’s some of our favorite weapons from Ashes of Ariandel and how you can get them for your own character within the DLC.

The Follower Sabre is one of the few cutlass-like weapons present in Dark Souls 3, featuring a very strong moveset that can absolutely demolish enemies in combat. Classified as a curved sword, the Follower Sabre gives the wielder access to a series of basic slashes that act like those of a straight sword, combined with an uppercut that deals a decent amount of damage. You’ll also get access to the Prying Wedge weapon art, which is a series of two swinging uppercuts that currently deal one of the highest amounts of damage in the game. Oh, and did we mention you can buff it? Because you totally can. With fire, magic, lightning; you name it.

To obtain this weapon, you’ll have to reach the Ariandel Chapel bonfire in the Painted World of Ariandel. From there, turn around and head back outside to the wooden rope bridge you just crossed and slash it twice, making it collapse down into the ravine below. Climb down the bridge and start working your way through the roots below. Once you’ve almost reached the bottom, kill a Follower throwing spears and turn around — the weapon’s nested against the mountain in some roots!

The Onyx Blade is one of the more unique weapons available in Ashes of Ariandel, giving players who prefer to mix magic and melee a heavy-hitting weapon that scales with Intelligence and Faith. This greatsword features a moveset like all the others in Dark Souls 3, but allows the wielder to swing and stab faster — with the added benefit of Elfriede’s Blackflame. When used, this weapon art coats the Onyx Blade in a flame that does fire and dark damage that will also deal small amounts of damage through enemy defenses. The coating animation is also very fast, meaning that you can apply it with little danger in combat against enemies or in PvP engagements.

This weapon is one of the more straightforward ones to obtain seeing as it drops off a key NPC present in Ashes of Ariandel’s main narrative. When you first approach the Ariandel Chapel once crossing the wooden rope bridge, speak with Sir Vilhelm before entering the chapel to meet Sister Friede. Later when you’re moving through the graveyard back underneath the chapel, you’ll meet him again and he will become hostile. Defeat him and the Onyx Blade will be yours.

Valorheart is the first weapon of its kind in Dark Souls 3 that focuses on heavy defense and exposing your enemy’s weakness. Unlike many of the other sword-and-board combos present in the game, Valorheart is equipped in one hand and stores the shield on your back until you “two-hand” your weapon. When both the shield and sword are in hand, Valorheart allows you to unleash a series of quick shield bashes and slashes that stagger your opponent and deal a decent amount of damage. The big advantage of this weapon though is the weapon art, which gives you access to the Lion Stance. While in this stance you can perform powerful thrust attacks without losing the defense of your shield and stun attacking enemies with a shield bash echoing out a lion’s roar.

Like the Onyx Blade, Valorheart is a weapon obtained from killing one of the new NPCs located with the Painted World of Ariandel. To locate the optional boss that drops it, you’ll have to navigate down through the same roots you did to find the Follower Sabre. This time go all the way down to the bottom and search for a massive open area covered with flowers. Approach the ruins to trigger the boss fight with the Champion’s Gravetender and Gravetender Greatwolf, who will drop the weapon when defeated.

The Crow Talons are a set of sharp claw weapons wielded by the Corvian Knights in the Painted World of Ariandel who use them to viciously attack their enemies and bleed them dry. This set of claws is currently one of the deadliest weapons present in Dark Souls 3 when used on a character built for them, allowing players to unleash a plethora of different slashes and stabs that all cause bleed buildup. More importantly, the weapon art Raptor Flurry allows you to execute a series of attacks that cannot be interrupted, dealing enough damage to kill an enemy player in one go. They may not be as effective against certain bosses or enemies in the game, but in PvP they’re an absolute monster.

You’ll find the Crow Talons in the Corvian Settlement within the DLC. First, head to the Corvian Settlement bonfire and then run across the bridge in front of you. After you’ve crossed, run up towards the graveyard and watch out for the Corvian Knight ahead. Kill him, then proceed to your right through the alley behind the houses. Move around until you see a ladder taking you up to the rooftops, then immediately turn around. You’ll see the Crow Talons on the roof across from you — run up through the building to claim them.

Easily the best weapon available in the Ashes of Ariandel expansion, Friede’s Great Scythe is a dream for anyone using a build focused on Dexterity and Intelligence. The regular scythe is carried in your right hand and can be used as a two-handed weapon like the one in Bloodborne. Both one-handed and two-handed attacks are extremely deadly with a wide swing that can hit multiple enemies, but the weapon’s true potential likes in the weapon art called Elfriede’s Stance. Just like the boss who carries Friede’s Great Scythe, you can conjure a magic-bladed support scythe in your left hand while the great scythe remains in your right. These can be swung in rotating movements, obliterating anything around you while severely hurting those who survive. You can also use the weapon art to swipe forward, laying a path of deadly frost magic that hurts any who are unlucky enough to be standing on it.

To get Friede’s Greaty Scythe for your character you’ll have to complete the entire expansion and defeat the final boss encounter. As a reward you’ll receive the Soul of Sister Friede, which can be exchanged with Ludleth of Courland for the weapon, along with 10,000 souls.