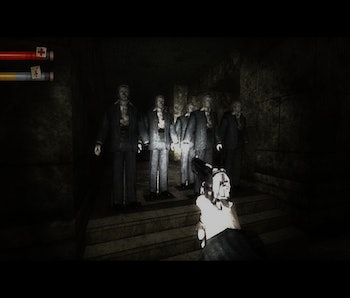 Monolith’s forensic horror game Condemned: Criminal Origins is a bit like an aesthetic cross between Manhunt and Seven. There are deranged (supernaturally so) junkies and vagrants running around abandoned, boarded-up buildings that are liable to scare the shit out of you in dark corners with a two-by-four to the face when you least expect it. But the resemblance to Seven is what’s really fascinating, because Condemned attempted to incorporate crime scene science into its fold.

You play an FBI agent on the hunt for a serial killer, which wouldn’t necessarily put the game into the Seven territory on its own if not for the extreme, low-lighted disrepair it revels in. And maybe had I played the game back in 2006, it would’ve been terrifying. Ten years later, in a post-P.T. world, finding Condemned frightening is like being afraid of Half-Life 2. (It is also quite different to think about the context of killing addicts and homeless, whether driven by some convenient genre motivation or not, in 2016.)

It’s too bad the game’s thrust doesn’t quite work now. The enemies are governed by erratic A.I. that ruin its monster box potential (not to mention negating the nuance of dealing with conflict as a field agent), and its art and sound don’t hit the same highs and lows of something like Silent Hill. Perhaps to expect that intensity isn’t entirely fair.

Still, Condemned was a fascinating and risky idea. A horror title for the 360’s launch where guns were rare and limited to whatever ammo was in them, leaving you stuck with a bit of rebar or a lead pipe — the whole idea seems unlikely to have happened. And it was your forensic equipment, allowing you to analyze samples and pick apart clues that made it stand out.

It remains a promising bit of what could have been — if only they had gone further with it. As it stands, you have a number of tools at your disposal: a UV light, 3D scanner, a green laser tool which works similarly to the UV but for liquids, and a digital camera to upload images to a lab colleague, all of which can only be used in context-sensitive areas; the game picks which tool to use for you.

In practice it’s less actual puzzle-solving than simply an interesting way to break up the too numerous fights, not that that will stop enemies from attacking you while you’re analyzing samples and the like. It makes one wonder what, say, the Arkham games could do if Batman were actually allowed to be the world’s greatest detective.

Unfortunately, robbing you of the fun of much agency in these situations is typically what happens. They are fun as set dressing, and certainly make me interested in seeing someone do an independent take on the subject matter, with the horror focused largely on investigating crime scenes.

Sadly, it was not to be, and the series has been dormant for eight years. The science of criminal cases, or some approximation of mimicking its basics, is actually quite dull compared to killing monsters or giving yourself an ulcer from psychological trauma. Any simulation including them still has to be a game, in theory. Maybe that should change. But if there’s a reason to check out the game now that it’s backwards compatible on Xbox One, that’s it.

There is some comfort to be found in the Fincher-esque blight that permeates Condemned’s vision. The art is commendably baroque, sagging, and unkempt in its unfinished drywall and groaning concrete, tagged over in a sea of graffiti; when you’re not busy messing with your lab equipment, the detritus is almost palpable, all the more impressive in a decade-old game. For the kind of seedy, surreal procedural Condemned is going for, these fit perfectly.