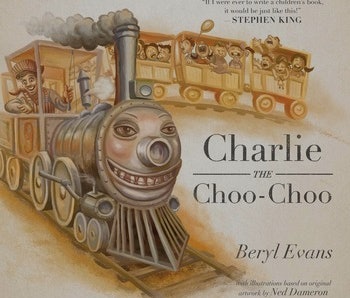 A children’s book from the world of The Dark Tower is coming to bookstores, but maybe don’t read this one to the kids before bed. Written by Stephen King under the name Beryl Evans, Charlie the Choo-Choo became a part of the plot in The Dark Tower III: The Waste Land when Jake Chambers purchased the book and later recognized elements from it in the real world.

Charlie the Choo-Choo is about Engineer Bob who’s best friend is his train, Charlie. The synopsis describes the book as, “a story about friendship, loyalty, and hard work.” It may not be your average sweet and uplifting kids book, but it’s exactly what you’d expect from Stephen King: a little dark, a little sad, and a little weird.

Much of Charlie the Choo-Choo is actually taken from The Dark Tower universe. Beryl Evans is plucked from the pages of the series, and while Charlie himself isn’t a fixture of the universe, a real train named Blaine the Mono (which shares many of Charlie’s characteristics) exists in the world of The Dark Tower.

Though the book that will be for sale was written by Evans, in The Dark Tower, it isn’t always Evans who authors the book. In Jake’s dimension (Keystone Earth), Charlie the Choo-Choo is the work of Evans, but in Roland’s dimension, the book has a different author, owing to Beryl Evans’s death. So, as Evans’s Charlie the Choo-Choo goes on sale here, perhaps there’s another dimension in which the book will be hitting shelves under another name.

Charlie the Choo-Choo is available for pre-order on Amazon and will be available November 22.

More like this
Culture
Jan. 25, 2023
David Cronenberg made the best Stephen King adaptation you probably haven’t seen
By Jon O'Brien
Entertainment
Jan. 13, 2023
Foundation Season 2 could fix the worst thing about the Isaac Asimov books
By Ryan Britt
Culture
Jan. 20, 2023
Why The Lost World is better than all the other Jurassic Park sequels combined
By Ryan Britt
LEARN SOMETHING NEW EVERY DAY.
Related Tags
Share: